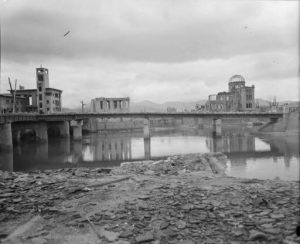 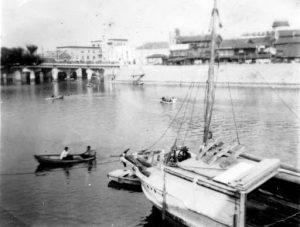 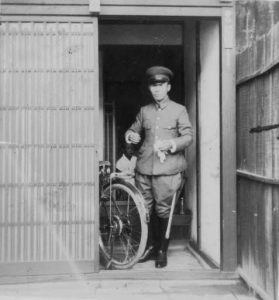 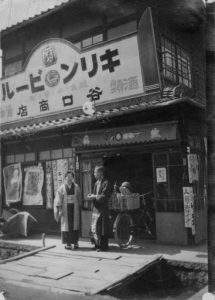 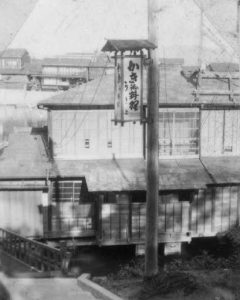 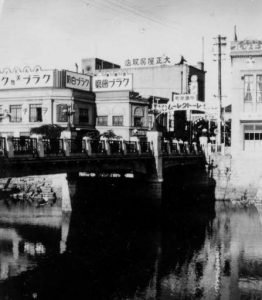 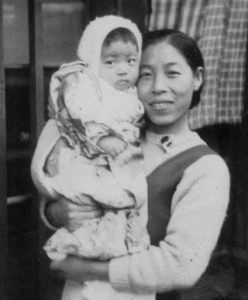 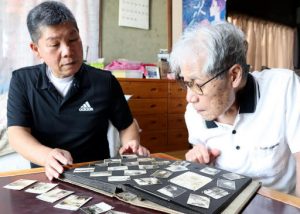 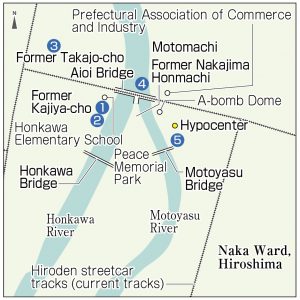 Okiharu Terao holds on to his father’s old photos in Miyoshi
by Rina Yuasa, Staff Writer

Okiharu Terao, 81, a resident of Miyoshi City in Hiroshima Prefecture, has carefully kept photographs taken by his father Motoichi (who died of illness on the battlefield in 1944) prior to the atomic bombing of street scenes in the hypocenter area and of his family. At the time, the Terao family’s residence was located in Kajiya-cho, an area to the south of Honkawa National School (now Honkawa Elementary School). Across the river from the home could be seen the domed roof of the Hiroshima Prefectural Industrial Promotion Hall (now the A-bomb Dome). “I am nostalgic for the area of those days,” Okiharu said. The scenes he witnessed in person after the atomic bombing are juxtaposed with such fond memories.

The father Motoichi, an army officer, commuted to the Chugoku Military District Headquarters from the official quarters where he lived with his family. Kajiya-cho was an area replete with rows of small factories and lumber shops. Motoichi’s hobby was photography, and he is said to have taken photos in numerous areas such as his neighborhood, including the Nakajima Honmachi area where the Hiroshima Peace Memorial Park was later established, the environs around the Hiroshima train station, and the Kannon area, where his relatives lived.

Opening an old photo album, Okiharu said, “I only have blurred memories of my father.” The album contained photos of him taken soon after he was born in 1939, and those of his relatives celebrating the Boys’ Day festival in May. The beaming faces of people in the photos provide a glimpse of how his father Motoichi viewed his subjects through the camera.

Motoichi was sent to mainland China in 1943. Okiharu then lived with Shizuko, his mother, and two younger brothers. His memories of those days include getting a haircut at the Hamai Barbershop and playing in the river. “I was surprised one time when my younger brother fell off a boat into the Honkawa River. My cousin reached over and plucked him out of the water,” described Okiharu.

In July 1945, a notice of his father’s death was delivered to his family after a one-year delay. The notice reported that Motoichi had died from illness on a Changsha County battlefield in China’s Hunan Province. With the news, Okiharu and his family evacuated to the area of Gion-cho (now part of Asaminami Ward), where Motoichi’s parents’ home was located, carrying with them valuables and photo albums. On August 6, soon after they had left, the area including their house was annihilated in the atomic bombing.

The following day, Okiharu Terao and his mother walked over to the Kajiya-cho area. He said, “I saw the charred body of someone whose head was immersed in a water tank used for fire prevention. It was an unforgettable scene.” Walking together with them was Okihiro Terao, 80, his younger brother, who lives in Asaminami Ward. Okihiro reflected on the past when he said, “Our mother later told me that she had no choice but to stand still for a moment in front of the burned-out remains of our home.” Their house was located about 350 meters from the hypocenter. “If my father’s death notice had been delivered half a month later, and if we hadn’t evacuated, both our lives and the albums wouldn’t have survived. I believe my late father saved us,” said Okihiro.

After the war ended, the mother and boys moved around both within and outside Hiroshima Prefecture and experienced a great deal of hardship. Okiharu never told anyone that he was an A-bomb survivor but now visits the Peace Memorial Park every time he has a chance to visit Hiroshima. “I want to convey the fact that people led normal lives in the area before the bombing.” Ten years ago, he donated the original data of three photos to the Peace Memorial Museum.

Toshiya Terao, 57, Okiharu’s oldest son who is a resident of Miyoshi City, understands his father’s wishes well. This fiscal year, Toshiya applied to Hiroshima City’s program for the training of ‘memory keepers,’ who carry on the tradition of communicating the testimonies of A-bomb survivors. He said, “As a second-generation A-bomb survivor knowing a father whose life was changed by the atomic bombing, I want to pass on to others the memories of the A-bomb survivors and their wishes for a peaceful world.”