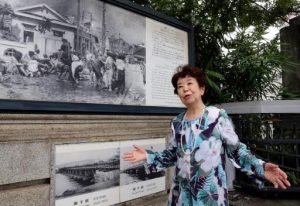 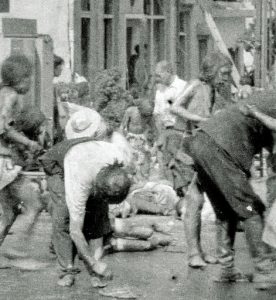 “I think the man in the rear of the photo is my father-in-law.” Tokiko Matsubayashi, an 89-year-old physician in Naka Ward, pointed to the small figure of a man wearing a white shirt far in the background behind a group of wounded civilians in the photograph. It was taken on August 6, 1945, at the west end of Miyuki Bridge in Naka Ward, Hiroshima City, by the late Yoshito Matsushige, a Chugoku Shimbun photojournalist at the time. The man appearing in the photograph was Yasutaro Matsubayashi (1890–1961), a physician who provided first-aid to people at the scene immediately after the atomic bombing.

At a little after 11:00 a.m. that day, the photographer Mr. Matsushige took his first photograph of the wounded who had gathered around the police box at the west end of Miyuki Bridge. Being among people whose clothes and hair are in tatters, the man’s white shirt is conspicuous in the photo. “His profile, hair, and gaze as a physician looking at the wounded give us as his family confidence that the man is Yasutaro,” Tokiko said.

Yasutaro, then 54, had his own medical practice in Senda-machi (now part of Hiroshima’s Naka Ward). At that time, physicians were prohibited from evacuating to outlying areas when there were air raids. On the night before the atomic bombing, an air-raid alert had been issued. Yasutaro, head of the area’s relief squad, stood by at Senda National School (now Senda Elementary School) until around daybreak together with other physicians working there, preparing to establish a first-aid station in case an air raid took place.

On the morning of August 6, Yasutaro experienced the atomic bombing at his home, which doubled as a clinic, located about 1.7 kilometers from the hypocenter. Senda National School was leveled and went up in flames because of the bombing, which meant that Yasutaro had to set up a temporary relief station at an alternate site—the vacant lot in front of the police box adjacent to the west end of Miyuki Bridge, about 2.2 kilometers from the hypocenter.

According to notes written by Yasutaro in December 1960, a short time before his death, not many people had suffered from external wounds at first, which he surmised “might be related to time and distance,” so Yasutaro treated those wounded with injections of heart stimulant drugs he had on hand. However, the number of wounded progressively increased. He wrote, “The military’s rescue crews put seriously injured people on a truck and carried them in the direction of Ujina, and I provided first-aid to the slightly injured.” Upon their escape, students that had been mobilized to the city center to demolish buildings “cried and complained of sores and throbbing pain from serious burns over their entire body.”

The notes indicated that Yasutaro continued relief activities until “about noon,” which implies he was around the police box when Mr. Matsushige took the photograph. He also wrote that Yonezo Tanaka, a dentist in the neighborhood, was the only other medical personnel who engaged in first-aid activities there.

In 1948, Yasutaro rebuilt his clinic in the location where it stands today. He died in 1961. Tokiko married Yasuhide, Yasutaro’s second son, the year before her father-in-law’s death. She did not have a chance to hear from him about his A-bomb experiences and relief activities in which he was engaged, nor did she know about the notes he wrote. Her husband experienced the atomic bombing at a factory in the area of Minamikanon-machi (now part of Nishi Ward), where he, then a student at Hiroshima Second Middle School (now Kanon High School), was mobilized for the war effort. Yasuhide also did not speak much of his A-bomb experience.

After the interview with the Chugoku Shimbun, which touched on relief activities after the atomic bombing, Tokiko carefully examined the materials at home and found letters and the notes written by Yasutaro, from which she first learned details about her father-in-law’s actions, including his relief work at Miyuki Bridge.

Just around that time, an enlarged picture of the Miyuki Bridge area reappeared in the newspaper with the news that five photographic negatives taken by Mr. Matsushige on the day of the atomic bombing had been designated as important tangible cultural assets by the Hiroshima City government. The images became a topic of conversation among Yasutaro’s remaining family members. With that, they looked more closely at the photos with the idea that “he could be in there somewhere,” and that’s how they found him.

“I heard that he worked hard without paying attention to his health, making 40 to 50 house calls a day even before the war. I now find out that he was committed to treating the wounded right after the bombing.” This month, she buried Yasuhide, her husband and the physician with whom she went through life together. He was 91 years old. “My father-in-law’s life, to a certain extent, was rejuvenated in our family. I feel relieved we could learn of his journey before my husband passed away,” said Tokiko calmly.