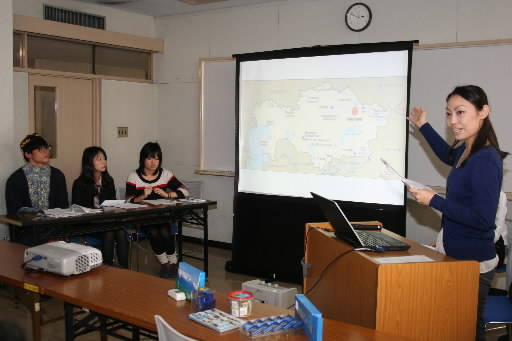 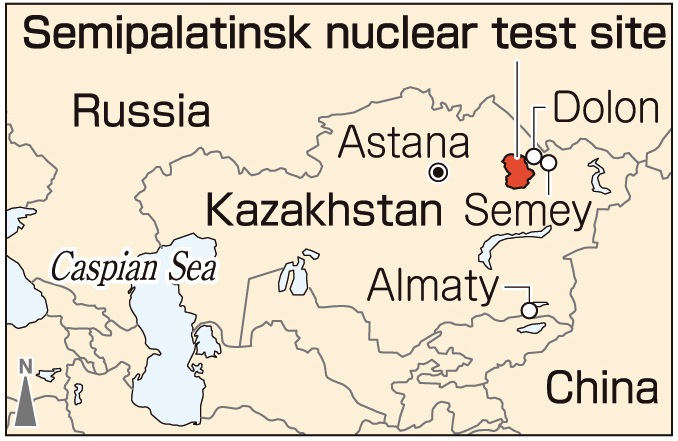 On December 1, the members of a youth group in Hiroshima, called CANVaS, who visited Kazakhstan this past summer on a “study tour” of that nation, held a gathering to report on their experience at the Hiroshima Youth Center in the heart of the city. The country of Kazakhstan is where the largest nuclear test site administered by the former Soviet Union was located. The CANVaS members shared the current conditions in that nation, where Kazakh citizens continue to suffer from ill effects to their health even 20 years since the nuclear test site was closed, as well as their exchange activities with young people there.

Six members of the group, including Takayuki Koasano, 33, the CANVaS leader, recounted their stay of 11 days in Kazakhstan, starting on August 28. They described how they met three radiation sufferers in the village of Dolon, close to the nuclear test site, who have developed cancer and other diseases. Mr. Koasano, originally from Asaminami Ward, Hiroshima and now a resident of Tokyo, pointed out, “The world is still threatened by nuclear weapons. Meanwhile, the medical support for those around the test site is inadequate.”

Teaming up with local university students, CANVaS members held their first joint peace forum in the city of Semey (formerly Semipalatinsk). At the event, the Japanese and Kazakh youth decided to work together on a website that will disseminate the nuclear damage suffered by both the A-bombed city of Hiroshima and the nuclear test ground of Kazakhstan. One CANVas member called the peace forum “a big achievement.”

In the city of Almaty, the former capital of Kazakhstan, the CANVaS members took part in an exchange by making “okonomiyaki,” a local Hiroshima specialty, and sushi alongside the Kazakh participants. Yu Kawasaki, 22, a resident of Matsuyama, shared details of the event, and said, “It’s important to be open to different cultures. Mutual understanding is what will lead to peace.” Mr. Kawasaki, originally from Nishi Ward, Hiroshima, is a fourth-year student at Ehime University.

Mai Nikami, 19, a second-year student at Hiroshima Shudo University and a resident of Nishi Ward, said, “I’d like to convey the reality of nuclear damage in both nations to a lot of people. I also want to continue making efforts with Kazakh youth to help abolish nuclear weapons.”

It was the fifth visit to Kazakhstan by members of CANVaS. About 20 people took part in the gathering.