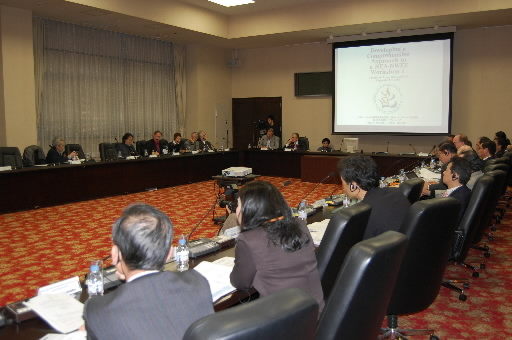 An international gathering to discuss the current conditions and challenges involved in realizing the denuclearization of Northeast Asia opened in the city of Nagasaki on December 7. About 40 experts from inside and outside Japan are attending the workshop at Nagasaki University, co-hosted by the university’s Research Center for Nuclear Weapons Abolition (RECNA) and other entities.

Hiromichi Umebayashi, the director of RECNA, said, “A nuclear-free Northeast Asia is essential in the pursuit of a nuclear-free world.” Pointing to a new approach, which could be key to advancing this aim, Mr. Umebayashi referred to “A Comprehensive Agreement on Peace and Security in Northeast Asia: An Approach to Break the Gridlock,” a proposal made in fall 2011 by Morton Halperin, a former special assistant to the president of the United States.

Mr. Halperin said in his keynote speech that the efforts made so far to encourage North Korea to abandon its nuclear arms ambitions, including the six-nation talks, have failed. In order to move beyond this impasse, he stressed the importance of creating a comprehensive agreement which addresses North Korean hopes, such as the termination of the state of war and the normalization of diplomatic relations.

Another keynote speaker, Peter Hayes, the executive director of the Nautilus Institute for Security and Sustainability in the United States, said that conventional wisdom will no longer work with regard to North Korea and that problems must be pursued within a new framework which involves other nations, including Mongolia. In a question and answer session, such issues as the reasons behind the failure of the six-party talks were raised.

In subsequent discussion, researchers from South Korea and China, along with experts from the Disarmament Division of the United Nations, exchanged views on the challenges and prospects of realizing a nuclear-free Northeast Asia.

Discussion will continue on December 8. Public symposiums on this theme will be held that afternoon at Nagasaki University and on the evening of December 10 at Meiji Gakuin University in Tokyo, where the gathering will come to a close.