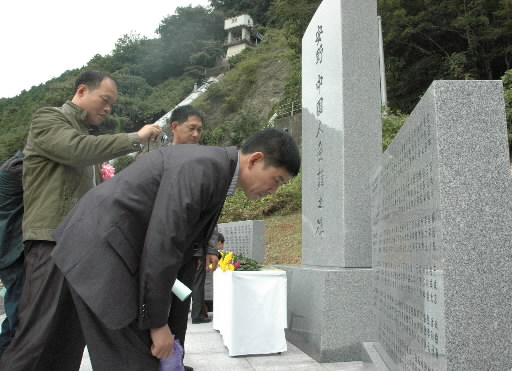 On October 19, a gathering was held in front of a stone monument near the Yasuno Power Plant, located in the Akiota area in Hiroshima Prefecture. The gathering was intended to comfort the souls of the Chinese laborers who were brought to Hiroshima by force to engage in the construction of the Yasuno Power Plant during World War II. It also sought to promote ties of friendship between Japan and China. A total of 23 Chinese visitors made the trip to Japan through a project designed to invite family members of those who suffered. This effort is funded by the Nishimatsu Construction Company, located in Tokyo, which undertook the construction work during the war.

In addition to the Chinese visitors, about 100 people, including local residents and those connected to the project, attended the gathering. They offered a silent prayer in front of the stone monument inscribed with the words “Yasuno: Monument to Remember Hardships Suffered by Chinese People.” They also placed flowers on the monument. The Chinese visitors looked for names of relatives and took photographs of these names.

Yán Chégn Xīn, 46, whose uncle was among those brought to Japan, said, “My uncle was able to return to China. But he was in poor health and died before I was born. Having the chance to see his name on the monument, I feel like I was able to meet him.”

Twenty-nine of the 360 Chinese people who were taken to the construction site died from heavy labor or in the atomic bombing. The Nishimatsu Construction Company, through its Nishimatsu Yasuno Friendship Fund, initiated the project in 2010 and a total of 173 people have visited Japan to date. As all those who wished to visit the site have already come, this will be the last visit by family members of the dead.

Masatoshi Uchida, the chair of the steering committee of the fund, commented, “We will continue to hold the memorial gathering for the Chinese forced laborers. We believe that patient efforts will constitute the foundation of friendly relations between Japan and China.”