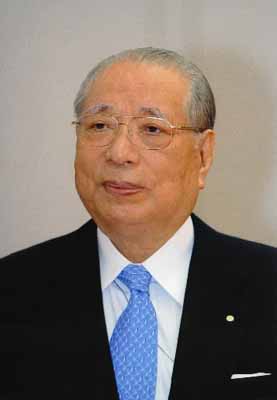 Hiroshima is the true home of all global citizens who long for peace, an eternal city of peace whose struggles illuminate the way to the future.

Many of the world’s leading intellects whom I have engaged in dialogue have observed that visiting Hiroshima was a life-changing experience.

I will never forget the words of the late Dr. Joseph Rotblat, co-founder and past president of the Pugwash Conferences on Science and World Affairs: “When I viewed the photographs in the Peace Memorial Museum, I could barely contain my tears. Ever since, I have been urging the museum to establish permanent exhibits in many other places outside Hiroshima.”

The first president of a reunified Germany, Richard von Weizsacker, maintained that there is no city that elicits such strong sentiments of peace as Hiroshima. I have felt entirely the same since my youth.

That is the reason I have called on world leaders, the leaders of the nuclear-weapon states in particular, to visit Hiroshima to witness firsthand the suffering wrought by the atomic bomb, and meet there regularly to seek the way to nuclear abolition.

In July 1990, I met with Soviet President Mikhail Gorbachev in Moscow. At the time, the prospects for his first visit to Japan were far from clear, but nevertheless I urged him to visit Hiroshima. His eyes lit up when I uttered the name of the city. I understand that he has since visited Hiroshima three times.

The G8 Lower House Speakers’ Meeting was held this month in Hiroshima. It is extremely significant that the leaders of the legislatures of the G8 countries, including those of nuclear-weapon states such as the United States, the United Kingdom, Russia and France, met there to discuss peace and disarmament issues, resulting in an agreement to maintain and further strengthen the Nuclear Non-Proliferation Treaty.

Hiroshima’s Peace Memorial Ceremony held on August 6 this year was attended by the ambassadors of 55 countries, the highest number ever. Foreign visitors to Hiroshima Peace Memorial Museum exceeded 170,000 in 2007 alone, also a record.

For every movement, there is a banner, a symbol of the cause. To uphold and defend the proud banner that is Hiroshima is to sustain humanity’s lifeline to peace.

Sixty-three years after the atomic bombing of Hiroshima, progress toward disarmament remains frustratingly slow. Indeed, dark and ominous clouds of nuclear proliferation hang heavily over us. Against this glowering backdrop, the conscience of the world finds a light of hope in the unflagging voice and dedication to peace of the citizens of Hiroshima.

One example of this commitment is the 2020 Vision Campaign, the drive by the worldwide association of Mayors for Peace toward achievement of complete nuclear disarmament by 2020. The campaign has attracted worldwide attention: indeed, the first question posed to me during a recent interview with the Inter Press Service was about the campaign and its significance.

Hiroshima’s unceasing efforts are at the forefront of a new momentum toward achieving a transition away from a security regime dependent on nuclear arms.

Former leaders of the United States and Soviet Union who were in office during the Cold War are now calling for such change, as seen in the widely-noted proposal penned by such prominent figures as former U.S. Secretary of State Henry Kissinger. And at the G8 Hokkaido Toyako Summit held in July this year, a call on all nuclear-weapon states to undertake nuclear disarmament efforts in a transparent manner was explicitly stated in the Leaders Declaration for the first time.

We have recently seen one substantial accomplishment in the field of disarmament, made possible by the initiative of civil society: the Convention on Cluster Munitions. It was adopted in May this year at the Dublin Conference through the cooperative efforts of nongovernmental organizations (NGOs) and governments committed to the cause of disarmament. As one who has urged an early banning of these demonic weapons, which indiscriminately slaughter civilians and hugely impede post-conflict reconstruction efforts, I would like to express my respect to those whose noble dedication made the convention possible.

Ukraine, formerly a part of the Soviet Union, completely dismantled what had been the world’s third largest nuclear stockpile within five years of achieving its independence. When President Viktor Yushchenko visited Hiroshima three years ago and was asked about this relinquishment of nuclear arms, he replied: “On a human level, my feelings are undoubtedly close to those of hundreds of millions of people who simply feel safer the further away they are from something as dangerous as this.”

Life is of supreme value: There is no need for these perilous nuclear weapons that threaten and destroy life. Nothing is more powerful than this simple, heartfelt cry of ordinary citizens.

History teaches that even the seemingly impregnable institutions of slavery, apartheid and the Cold War order all came to an end. Nuclear abolition, too, can surely be realized through tenacious efforts by people sincerely devoted to peace who join forces together.

Coinciding with the Preparatory Committee for the 2010 Review Conference of the Parties to the Treaty on the Non-Proliferation of Nuclear Weapons, the SGI showcased the exhibition “From a Culture of Violence to a Culture of Peace: Transforming the Human Spirit” this spring at the United Nations Office in Geneva. From the venue could be seen the fabled outline of Mont Blanc, shimmering in the distance. The goal of nuclear abolition may also seem distant and hard to reach, but as one UN official asserted, “We must advance no matter what!”

NGO-led efforts to establish the illegality of nuclear arms as the common norm of humanity are also gathering force. A revised version of the Model Nuclear Weapons Convention, originally drafted by NGOs, has been accepted as an official document of the United Nations, while the proposal for the denuclearization of the Arctic region by the Canadian Pugwash Group is also attracting widespread attention.

The Chugoku Shimbun, standing at the forefront of Japanese journalism throughout the post-World War II era, has continuously asserted that it is impossible for nuclear weapons and humanity to coexist. It also publishes Peace Seeds, a remarkable peace paper produced by teenagers in Hiroshima. I wholeheartedly support the holding of a Children’s Summit in Hiroshima--one of the proposals to the G8 Lower House Speakers’ Meeting recently published in Peace Seeds.

When we met, International Atomic Energy Agency (IAEA) Director General Mohamed ElBaradei stressed that people of every color, religion and race all have the same hopes and aspirations, and that young people’s growing awareness represents our future, the only path for humanity’s survival.

On September 8, 1957, my mentor and second Soka Gakkai president Josei Toda issued his historic declaration calling for the abolition of nuclear weapons. Central to this declaration was the belief that nuclear abolition is the mission and responsibility of youth.

The key to unleashing the power of nuclear energy was realized when Albert Einstein arrived at the mass-energy equivalence formula E=mc2. I am convinced that now is the time to establish an equally potent formula for peace, one that will unleash, for the safety and well-being of humanity, the infinite constructive power inherent in the lives of all people.

The people of Hiroshima have tirelessly striven to transform the currents of the times. Today, young peace-loving citizens of the next generation are steadily standing up as heirs to this spirit of Hiroshima.

It is my unchanging conviction that to nurture the future of Hiroshima is to nurture an inextinguishable hope for a world free from nuclear weapons.
ツイート
Return