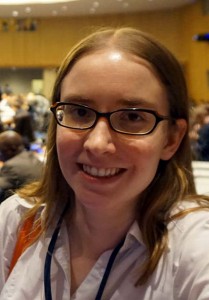 Article 36 works in several global coalitions focused on preventing the harm to people caused by particular weapons – including cluster munitions, other explosive weapons, and looking to the future, autonomous weapons. The role we generally take is in building political strategies, developing policy thinking and framing issues to drive new standards at the international level. This is what we have been doing for the nuclear weapons ban treaty over the past five years, in particular by developing the idea of negotiating a prohibition treaty with or without the initial participation of the nuclear-armed states.

As an organisation focused on addressing humanitarian harm, during the negotiation of the treaty we also concentrated on ensuring that the rights of the victims of nuclear weapons, and the damage to the environment that has been caused by use and testing, would be addressed by the treaty. As the citizens of Hiroshima know too well, many people and communities are still suffering from the long term and inter-generational effects of nuclear weapons. This treaty obliges its parties to do more to help. With our partners, we will be focusing on ensuring that states are ready to take these obligations on when the treaty enters in to force. We will also be encouraging states like Japan and Australia to engage with this process: their citizens have been affected by nuclear weapons, but these countries have so far rejected the treaty – despite the framework it provides to better address these citizens’ needs.

To reach a world without nuclear weapons, what we need fundamentally is for governments not to want these technologies any more because they have become taboo, like the other weapons of mass destruction. It is unrealistic to expect countries to just give up something that they think gives them power, status and protection – and this is where nuclear disarmament has gotten stuck. We cannot and should not wait for states that possess nuclear weapons and countries in nuclear weapon use arrangements to be ready for disarmament, whilst they still see these weapons as legitimate – instead, we need to take steps to push them towards a point where they can no longer take this position.

ICAN campaigned for this treaty because it can play a key role in this process of building the stigma around nuclear weapons - which is already considerable given that few leaders will make arguments for their use. The treaty represents the majority of the international community foreswearing nuclear weapons not because more powerful countries told them to, or in exchange for some other benefits, but because they actually do not want these weapons, as they are abhorrent. We and the states joining the treaty must use it to reinforce this message, and put global political pressure on those with nuclear weapons over the legitimacy of their arsenals.

Unfortunately I have never visited your city but I very much hope to be able to in the future!

My message to the citizens of Hiroshima is that if nuclear disarmament and the terrible impacts of nuclear weapons are important issues to you, current international events of course make this a very worrying time - but with the agreement of the treaty on the prohibition of nuclear weapons, I think it can also be a time of for hope and opportunity, that we will get rid of nuclear weapons in the longer term. We have marginalised the role of other weapons of mass destruction in our world, with international law playing a key part in this – and we can do this with nuclear weapons too. The global movement of states, international organisations and civil society involved in the ban treaty movement will need your help, and the help of citizens around the world, to do this. Understanding and remembering the horrific experiences of those in your city more than seventy years ago will continue to be crucial to making the case that nuclear weapons are fundamentally illegitimate – weapons that kill indiscriminately and in the most terrible ways cannot be left in the hands of any nation.