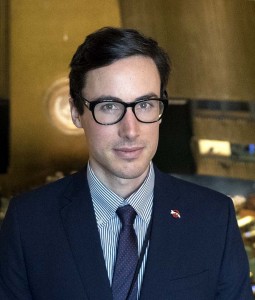 We launched ICAN in 2007 because we felt that the global anti-nuclear movement had been languishing. We needed to inject it with new energy and get better organised. We reached out to groups around the world and asked them to become partners. We developed the tools needed to promote the campaign’s message.

We spoke at public meetings, visited schools, met with politicians, briefed journalists and addressed the United Nations. Everywhere we travelled, we explained of the need for a treaty that would declare nuclear weapons illegal. This, we said, would put us on the path to their total elimination.

Many diplomats and politicians told us that we were wasting our breath, that nuclear weapons were such an entrenched part of our international system that they would never be prohibited. But we persevered. We continued to build our support base. And we formed close partnerships with like-minded governments.

The treaty, of course, is not an end in itself. Rather, it is a tool with which to achieve our goal – the total abolition of nuclear weapons. We are now reaching out to all of the world’s governments to urge them to sign and ratify the treaty without delay. This is the only responsible course of action.

The adoption of the treaty on 7 July 2017 marked a historic turning point. As Setsuko Thurlow, a survivor of the atomic bombing of Hiroshima, said that day in New York, this is “the beginning of the end of nuclear weapons”. The treaty offers a pathway forward at a time of great global crisis.

But it will only truly succeed if people everywhere embrace it. I hope that the Japanese people will take to the streets and demand that their government sign it. I hope that teachers across Japan will educate their students about its importance. I hope that the wishes of hibkausha will at last be fulfilled.

The treaty challenges us to see nuclear weapons for what they are: the most abhorrent instruments of mass murder ever built. Their development signifies not a country’s elevation to greatness, but its descent to the darkest depths of depravity. These weapons are inhumane, indiscriminate and illegal.

We need to use the treaty to challenge the theory of deterrence. Nuclear weapons serve just one purpose: to transform cities into smouldering radioactive ruins. The treaty exposes deterrence as nothing more than government propaganda designed to mask the horrible reality of nuclear weapons.

I thank the citizens of Hiroshima for their decades of advocacy for peace. They have warned the world of the horrors of nuclear weapons. They have rebuilt their lives from the ashes and never given up the struggle for disarmament. They are a source of tremendous inspiration to people everywhere.

I have visited Hiroshima three times. Each time, I have left feeling more committed than ever to realizing the goal of a world free of nuclear weapons. We must never accept these weapons as a permanent fixture. They can and will be abolished.