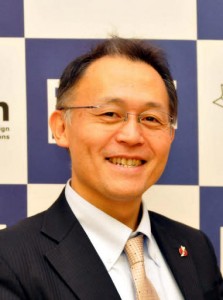 Peace Boat’s work involves two main activities. One is to convey the inhumane nature of nuclear weapons directly from A-bomb survivors through Peace Boat voyages in which the survivors can share their A-bomb experiences. We believe that this effort helped create the foundation for realizing the nuclear weapons ban treaty and influenced the reference to “A-bomb survivors” in this agreement. Our other activity involves promoting dialogue between the Japanese government and non-governmental organizations (NGOs). As ICAN has not formed an organization like “ICAN Japan,” the “Japan NGO Network for Nuclear Weapons Abolition” is now providing a platform for ICAN’s work in Japan. In cooperation with Japanese NGOs, ICAN has deepened discussions on the nuclear weapons ban treaty with the Japanese government. As was the case with the Group of Eminent Persons Conference held in Hiroshima the other day, it is important that the government seek out the views of NGOs. ICAN has been a strong supporter of all these activities.

As a result of this Nobel Peace Prize, ICAN now has a golden opportunity to expand its reach and promotional efforts 100, even 1,000, times. A year from now, we would like to be disseminating our message for a nuclear-free world more widely using many types of tools, including social media. Changing the Japanese government’s stance will not be easy, but the more people that show interest in the treaty, the more pressure can be brought to bear on the government to change its position. Currently, the nuclear weapons ban treaty is a topic that is only discussed among small groups of nuclear experts. Therefore, I want to put my energy into promotional efforts to sway public opinion in a way that the government will be unable to ignore.

To achieve our goal, it is imperative that the treaty be implemented as early as possible. ICAN will make an all-out effort to ensure that the treaty enters into force next year. Toward this end, we need to have at least one nuclear umbrella nation sign and ratify the treaty.

ICAN members around the world have offered their utmost cooperation for the various port calls made during Peace Boat voyages with A-bomb survivors. They not only have arranged opportunities for the A-bomb survivors to share their A-bomb accounts with local people, they have also arranged opportunities for them to speak with diplomats in those countries. In addition, ICAN members provide hospitality for the survivors, including good food. I can vividly recall the faces of these supporters. The ICAN members of these nations tell us that they are honored to hear the survivors’ stories, but it is we who express our appreciation to them. The teamwork of ICAN members, worldwide, has resulted in the realization of the nuclear weapons ban treaty and the winning of the Nobel Peace Prize.

I encourage the people of Hiroshima to cultivate their perspective of the world. While I understand that you hope that many people will visit the A-bombed city, it is also important that messages from Hiroshima be sent out to the world. To do that, you will need to learn about effective ways of conveying your messages, as well as the background to the nuclear abolition issue, which are challenging tasks. For instance, because the Japanese government is opposed to the nuclear weapons ban treaty, you will probably be asked for your opinion about the government’s stance when you visit other countries. This is actually a hard dilemma. However, in addition to inviting people from overseas to Hiroshima, if more people go abroad to talk about Hiroshima, this will enrich ICAN’s global efforts and Japan’s campaign for abolishing nuclear weapons. The reason that ICAN won the Nobel Peace Prize is because ICAN is an international campaign. I hope that young people who are interested in becoming involved in ICAN’s international activities will emerge from this city. It is important, I think, to have a system that will cultivate and train young people in this way, and I hope that this Nobel Peace Prize will become a source of inspiration for younger generations.

As I pursue my work, I feel that Hiroshima is the wellspring of my activities. I was not born in Hiroshima, nor did I begin my efforts for peace here. However, I continuously return to this city to reaffirm the spirit of my work.