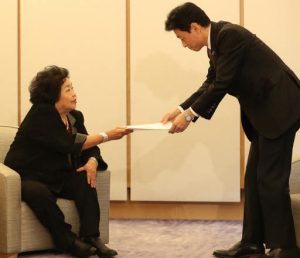 On December 6, Setsuko Thurlow, 86, an atomic bomb survivor originally from the city of Hiroshima who now lives in Toronto, Canada, met with Yasutoshi Nishimura, the deputy chief cabinet secretary, at the prime minister’s office. Ms. Thurlow delivered a speech last December at the award ceremony for the Nobel Peace Prize on behalf of the International Campaign to Abolish Nuclear Weapons (ICAN), the non-governmental organization (NGO) that was given last year’s prize. After the meeting ended, she held a press conference and responded to the fact that she was unable to meet directly with Prime Minister Shinzo Abe. She said that true leaders should meet with people who hold different views and engage in dialogue.

Starting in October, Ms. Thurlow made requests to meet with Mr. Abe, but Chief Cabinet Secretary Yoshihide Suga said that the prime minister’s schedule made this impossible and Mr. Nishimura met with her instead. Ms. Thurlow stressed that it had been heart-wrenching to learn that Japan, the nation that experienced nuclear attack, had taken the position that it would not sign the Treaty on the Prohibition of Nuclear Weapons, and she handed Mr. Nishimura a letter addressed to Mr. Abe which urges him to ratify the treaty. Mr. Nishimura said that he will deliver it to Mr. Abe.

The meeting with Mr. Nishimura was held behind closed doors, expect for the start. Speaking afterward to the press, Ms. Thurlow said, “Mr. Nishimura said that Japan’s reliance on nuclear deterrence was necessary to protect the people of this nation.” She also said, “The people of Hiroshima were killed indiscriminately by the atomic bomb. I cannot accept the idea of nuclear deterrence, which is based on the possible use of these weapons, and I objected to his argument.”

On December 5, Ms. Thurlow met with Fumio Kishida, the chairman of the Policy Research Council of the Liberal Democratic Party. Mr. Kishida represents the first district in Hiroshima. About that meeting, Ms. Thurlow said, “I gained something from our meeting. He was open with me and said that he would consider the ideas I came up with.” At the same time, she stressed that it was a pity that Mr. Kishida, who is from Hiroshima, was the foreign minister when the Japanese government chose not to take part in the talks at the United Nations to establish a treaty that would outlaw nuclear weapons.

To the public, she had this message: “I hope each one of you will put pressure on the government so that Japan will ratify the treaty. Let’s work together.”