Striving to fill voids in Hiroshima, Part 4: Victims from other parts of Japan 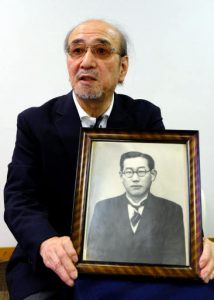 As of this past March, the City of Hiroshima has compiled the names of 89,025 victims of the atomic bombing who had died by the end of 1945. These names were obtained through the city’s Statistical Survey of Atomic Bomb Victims. A new name will be added to the survey by the end of next March after the listing of this name on the register of A-bomb victims in Hiroshima is completed. I traveled to the city of Kyoto to meet the family of this person.

Osamu Kamata, 74, appeared with a picture of his late father, Yaichiro, at our meeting place. “I was shocked to learn that I was praying before the Cenotaph for the A-bomb Victims without knowing anything,” he said. Mr. Kamata told me how he ended up submitting the application for inclusion in the register in July of this year. His tone of voice conveyed that he still felt surprised over this turn of events.

Yaichiro’s family ran a kimono fabric shop in Kyoto and he was planning to take over the family business. Mr. Kamata was born in January 1945, a year after his parents were married. However, Yaichiro was conscripted into the army and went to Hiroshima alone to join an army corps. According to Mr. Kamata’s mother, Hisa, Yaichiro was unable to spend much time with his son. After the war, military personnel delivered Yaichiro’s remains to the family. He was 27 years old when he died.

“I thought names were automatically added to the register.”

Mr. Kamata lost his father when he was only seven months old. In recent years, he visits Hiroshima almost every year because he has a friend who lives in the city. On each occasion he also visits the Peace Memorial Park and puts his hands together in prayer before the Cenotaph for the A-bomb Victims. And when he does so, he feels a strong desire to find out what happened to his father on that fateful day. His father’s location at the time of the A-bomb attack remains unknown.

Mr. Kamata went to the Kyoto prefectural government for information about his father’s military service, and they directed him to Hiroshima city hall. By consulting with the staff at city hall, he learned, for the first time, that family members of an A-bomb victim can request that the city check to see if the name of the deceased is included in the register.

He learned that his father’s name was missing.

Mr. Kamata could not help crying out when he heard this news from a city staff member over the phone. “I thought that names were added to the register automatically by the national government or a prefectural government,” he said. Until her death in 2010, his mother would pray for her husband before the TV image of the Cenotaph for the A-bomb Victims during the Peace Memorial Ceremony, televised each year on August 6.

According to the city’s official death toll, “140,000, plus or minus 10,000” people lost their lives by the end of 1945, and about 20,000 of these are believed to be military personnel. Many of them were summoned to the “military city of Hiroshima” from all over the country, living here as temporary residents. The City of Hiroshima explains on its website that one reason it is unable to count the actual number of victims is because “the information related to military personnel is not available.”

However, Satoru Ubuki, a former professor at Hiroshima Jogakuin University, points out, “There is more information about military personnel than about civilians.” After the war, the government put priority on providing assistance to former soldiers, which means related documents are available. In the 1970s, Hiroshima University obtained a copy of a 17,000-page document from the War Victims’ Relief Bureau of the Ministry of Health and Welfare (now the Ministry of Health, Labour and Welfare), which provided support to former military personnel. The data from this document is reflected in the Statistical Survey of Atomic Bomb Victims.

Still, Yaichiro’s name was not there. The information in the document was mainly about the army troops that belonged to the Chugoku Military District based in Hiroshima. Yaichiro was attached to the second army signal corps in the Imperial Headquarters. According to the written account of a former corps member, the corps consisted of people mainly from other prefectures. Thus, it is possible that the material contained little information about the Imperial Headquarters.

Victims missing from the survey

Mr. Kamata has filled in one blank, one missing name. But there are surely other bereaved families throughout the country who assume that the names of the A-bomb victims are “automatically” added to the register when they pass away. Mr. Kamata said, “I’m thankful to the staff at Hiroshima City Hall for dealing with this matter empathetically. I hope other families feel moved to make an inquiry, too.”