Striving to fill voids in Hiroshima, Part 9: Police autopsy report as the most promising data 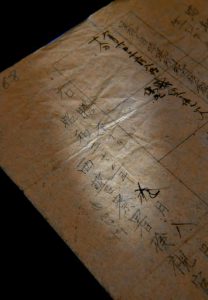 Generally speaking, the death toll of “140,000 plus-minus 10,000” has been used to estimate the number of victims who had died as a result of the atomic bombing of Hiroshima by the end of 1945. Meanwhile, the “actual number” of A-bomb victims whose names have been identified by the city’s Atomic Bomb Victims Project stands at 89,025. In fact, the most promising document that could help bridge the gap between these two figures remains missing.

This missing document is the autopsy report on A-bomb victims that was made by the former West Police Station (now the Hiroshima Central Police Station.)

In the aftermath of the atomic bombing, the police autopsied numerous bodies. The former Hiroshima Prefectural Police Department (now the Hiroshima Prefectural Police) compiled the information provided by 27 police stations based on their autopsy reports, and developed the report which stated that 78,150 people had died due to the atomic bombing by the end of November 1945. Of these, 54,320 victims, accounting for about 70 percent of the total, were in the jurisdiction of the West Police Station, and 8,327 victims were in the jurisdiction of the East Police Station (now the Hiroshima East Police Station).

In 1968, the original source of this report was in the spotlight. The autopsy report submitted by the East Police Station was found, which included the names of 8,341 victims and the places where they died, but the reason for the discrepancy with the figure provided as of 1945 was unclear. Once the report was made available to the public, family members who continued to look for their lost loved ones flocked to see it, feeling a ray of hope.

Search for autopsy report was unsuccessful

People then began to believe that the autopsy report from the West Police Station could be found somewhere, too. And so a large-scale search was initiated as part of the work to compile and publish the 100-year history of the Hiroshima prefectural police, which happened to begin in that same year.

In 1971, the 100-year police history was published. The book describes the circumstances of preparing the autopsy report at the time. According to this information, in their report the police officers noted the place and cause of each victim’s death, as well as his or her name and address, then cremated the body. “Day after day, the putrid smell and burning fire of cremation continued throughout the night,” it reads. Many facilities of the prefectural police department in Hiroshima were also consumed by fire after the atomic bombing, and a total of 354 officers lost their lives. However, despite this search, the report was never found.

Kyoko Kihara, 87, a resident of Higashi Ward and the wife of the late Akira Kihara (who died at the age of 88 in 2016), who was the former chief of the Hiroshima East Police Station and a member of the team that compiled the 100-year police history, said that during his life, Mr. Kihara sometimes said, “If only we had found the report made by the West Police Station.” When Mr. Kihara was interviewed by the Chugoku Shimbun, he also said, “I wonder how many victims’ names could be identified once the report is found.”

Even if the autopsy report is found, there is the possibility that some of the victims have already been identified in other documents. Still, it is certain that the report would be considered valuable new material toward this end.

Wondering if there was a chance that the report could be located, the Chugoku Shimbun visited the Hiroshima Prefectural Police Headquarters in Naka Ward, Hiroshima.

The West Police Station was located roughly 150 meters from the hypocenter and was devastated by the bomb blast. In the 12 months that followed the bombing, the police station was moved to three different buildings, one after the other. In 1961, it was again relocated to another building. Finally, in 1973, it settled at its current site, where today’s Hiroshima Chuo Police Station is located. The documents may have been dispersed and lost during this period.

Copy of autopsy report by West Police Station is on display

However, it was possible to see the West Police Station’s autopsy report at an unexpected place. One faded sheet from a copy of the report is on display at the Institute of the History of Medicine in the School of Medicine at Hiroshima University, located in Minami Ward. It reads, “At 8:10 in the morning of August 6, 1945, autopsies were conducted for the dead due to the air strike as follows.” The names of victims and their addresses are then listed with descriptions such as “Died from burns related to war damage.”

The Peace Memorial Museum in Naka Ward also holds several pages of the autopsy report by the West Police Station, which were donated by the family member of a victim. Given that a copy of the report exists, there is no doubt that the original text existed for at least a certain period of time.

The prefectural police’s 100-year history, which Mr. Kihara was involved in editing, conveys respect for the autopsy efforts by the police after the bombing with the words: “It was the embodiment of indomitable police spirit.” Mr. Imoto experienced the Western Japan Floods and Rain Disaster last summer. While searching for the West Police Station’s autopsy report, he imagined the bitter struggles that his precursors endured 74 years ago. He said, “For the families of victims, we want to keep looking for the report.”