Chugoku Shimbun launches website “Striving to fill voids in Hiroshima 75 years after the atomic bombing: Recreating cityscapes,” with photos, alongside maps, of the ‘everyday’ lost in the bombing 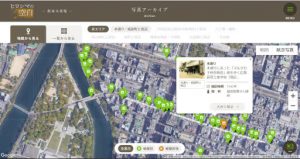 Website visitors can access about 150 photos of Hiroshima’s Hondori shopping arcade, Kamiya-cho, and surrounding areas. They show the bustle of the city center, smiling children, and social conditions as the city took on a wartime appearance. More photos of other city areas will be posted on the website in the future as the “Recreating cityscapes” space develops further.

The photos include those stored at the Hiroshima Municipal Archives and other public facilities in the city, as well as those kept in private homes and elsewhere. Some of the photos were contributed by our readers.