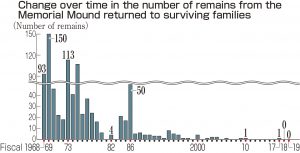 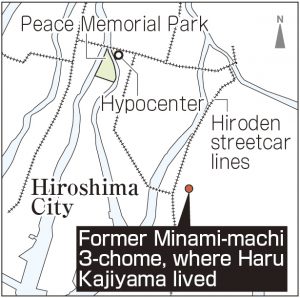 The city government of Hiroshima received an inquiry from someone regarding whether Haru Kajiyama (last name in Japanese: 鍛治山), a name on the list of unclaimed remains contained in the Atomic Bomb Memorial Mound in Naka Ward’s Peace Memorial Park, was his great-grandmother, who died in the atomic bombing. Hiroshima City announced on February 2 that, in response to this inquiry, it had begun to investigate the possibility of returning the remains to the deceased woman’s bereaved family. Although the Chinese characters used in the family name appearing on the list are not the same as those used in the inquirer’s name, the address is the same. If the great-grandmother’s remains were to be returned to her family, it would be the first instance in which unclaimed remains have been returned to a bereaved family since the fall of 2017.

The family member who contacted Hiroshima City’s Atomic Bomb Survivors Relief Department regarding Haru Kajiyama’s remains is Shuji Kajiyama (last name: 梶山), 54, a company employee living in Fuchu-cho. Mr. Kajiyama was apparently prompted to approach Hiroshima City about the remains after he was interviewed by a reporter from the Chugoku Shimbun. His great-grandmother Haru Kajiyama (梶山) was 61 years old when the atomic bomb was dropped on Hiroshima on August 6, 1945. The family was living in Minami-machi 3-chome (now part of Minami Ward), Hiroshima. Her remains were not identified after the atomic bombing.

On the list of names of the unclaimed remains, the address “Minami-machi 3-chome” appears together with the name “Haru Kajiyama (鍛治山).” According to a staff member of the Atomic Bomb Survivors Relief Department, “The matching addresses is a major factor in determining to whom the remains belong. The discrepancy in Chinese characters in the family name is likely the result of a misspelling.” Once there was a neighborhood called Kajiya-cho (鍛冶屋町) in Hiroshima, and the person who entered Ms. Kajiyama’s name in the list could have mistakenly written the Japanese 鍛治 instead of the correct character 梶 amid the chaos immediately following the atomic bombing.

To make absolutely sure, Hiroshima City will work to confirm whether any residents whose family name was Kajiyama (鍛治山) lived in or near Minami-machi around 1945. The city government will also conduct other research to confirm its findings before talking to Mr. Kajiyama about returning to him Haru Kajiyama’s remains.

The Atomic Bomb Memorial Mound was established in 1955, with the remains of about 70,000 dead contained in an underground vault in the mound. The names of most of those remains, however, are still unknown. In 1968, because some of the urns have names inscribed on them, Hiroshima City started to make publicly available a list of 2,355 unclaimed remains. At the moment, the number of names on the list, including that of Haru Kajiyama (鍛治山), has fallen to 814.

Although Hiroshima City sends posters listing the names of unclaimed A-bomb victims to local municipalities and various organizations throughout Japan every July, there are many cases in which no remains are returned to bereaved family members because the entire family, for example, was killed in the atomic bombing. The lengthy duration of time that has passed since the atomic bombing also makes the return of the unclaimed remains difficult, with only two sets of remains having been returned to family since fiscal 2010.