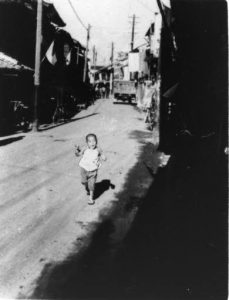 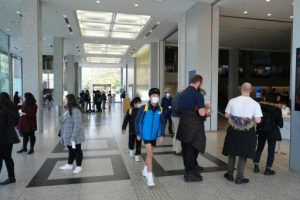 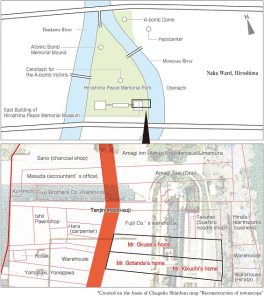 
Many people once lived in area where Peace Memorial Museum’s building now stands
Man with family name “Miki” included on list of unclaimed remains in Atomic Bomb Memorial Mound
When reading through the list of 814 A-bomb victims whose remains are stored at the Atomic Bomb Memorial Mound and finding the name “Junji Miki,” who lived at 66 Tenjin-machi, we noticed something. Mr. Miki’s address is right by the present location of the East Building of the Hiroshima Peace Memorial Museum in the city’s Naka Ward. The former Nakajima district, including the Tenjin-machi area, was once one of the busiest shopping streets in Hiroshima. The area is now taken up by Hiroshima Peace Memorial Park.

In 2000, the Chugoku Shimbun created the map “Reconstruction of townscape near the hypocenter” in an attempt to reproduce the area utterly destroyed in the atomic bombing. On the map, blank voids remain at 66 Tenjin-machi and the neighboring area. Would it be possible to fill at the least one such void by adding the name “Junji Miki” to the map?

Shown an old photograph, Shinobu Kikuraku, a museum official, said, “This is the street in front of the house at 66 Tenjin-machi.” The photo was taken by the late Shigeso Kikuchi, who used to manage a shop that dyed family emblems on fabric, located at 66-2 Tenjin-machi, next to 66 to the south. The photo has the appearance of Mr. Kikuchi aiming the camera in front of his shop to capture the former Tenjin-machi-suji street extending to the north. The photo captures a running boy with a smile on his face. Junji Miki may have also walked here.


Neighbor of Gotanda family
On August 6, 1945, Mr. Kikuchi was in New Guinea, a bloody battlefield during the war, after he was drafted into military service. Shigero Kikuchi, Mr. Kikuchi’s older brother who was then 33, his wife, and children lived at 66-2. All four members in Shigero’s family were killed in the atomic bombing. In the process of collecting information for writing the article, it was discovered that Hisao Gotanda, then 54, and his wife Ishiko, 50, had rented the west side of Mr. Kikuchi’s house and also died in the atomic bombing.

If the information on the list of unclaimed remains in the Atomic Bomb Memorial Mound is accurate, Junji Miki, who lived at 66 Tenjin-machi, must have been the Gotanda family’s neighbor.

Chiyuki Kakei, 90, Mr. Gotanda’s oldest daughter, who now lives in the city of Higashihiroshima, looked back on the situation in those days. “The big Amagi Inn stood several houses away from my home to the north, and I remember sumo wrestlers and soldiers staying there.” But, she added, “Neighboring my house to the north, I think there may have been a house similar to Mr. Kikuchi’s that was deep with an inner garden. I don’t remember exactly, though, because that was 75 years ago now.”

The Gotanda family originally lived in Otemachi, located on the other side of the Motoyasu River. But, Ms. Kakei and her parents moved to Tenjin-machi about one year before the atomic bombing. On the day of the atomic bombing, Ms. Kakei was staying at her grandparents’ home in northern Hiroshima prefecture on a holiday. After returning to Hiroshima, she identified remains found in the ruins of her home—located directly beneath the A-bomb’s detonation—as her parents’ by a gold tooth, among other items. She witnessed many reddish-black corpses burned to such a degree that she could not tell their gender. The remains of Mr. Kikuchi’s older brother’s family have yet to be found.

Based on other sources of information including a collection of A-bomb survivor testimonies and notes written by surviving family, we were able to obtain evidence left by a grandson of former residents of 66 Tenjin-machi.


Lack of supporting information
Nevertheless, the family name of those residents was not Miki but Okusa. At 66 Tenjin-machi, Sangoro Okusa, then 67, and his wife Tame, 58, perished in the atomic bombing. Yasuhisa Okusa, 60, Mr. Okusa’s great-grandson, who was born after the end of the war and now lives in Nishi Ward, was doubtful. “None of my relatives has the family name Miki.”

As shown in the case of the Kikuchi and Gotanda families, the possibility exists that the Okusa and Miki families may also have shared the house. There is no definite supporting evidence, however, to prove that hypothesis. Seeking more information, we looked through mementos left by the late Kanji Yamasaki, who had been involved with memorial ceremonies for the victims in the area. Mr. Yamasaki left a list of A-bomb victims in the area that was made by former residents. Two people with the family name Miki were found on the list, but their first names were different. The victims’ address information on Mr. Yamasaki’s list did not contain their house numbers.

Every day, large numbers of tourists visit the museum’s East Building from both Japan and overseas. How many perceive that where they stand used to be a place where once so many lives were being lived? The city government of Hiroshima is now working on plans to develop a facility to the north of the East Building to display to the public the A-bombed remains of the area that was part of former Tenjin-machi-suji. It would convey the presence of former residents who lived in the area and lost their lives in the atomic bombing but whose remains have not yet been returned to surviving family.

In the course of gathering information for the article, locations where six people from three families had lived and their deaths in the atomic bombing were newly verified. More effort is needed from this point to fill the voids of the area’s former residents, including Mr. Miki.