Striving to fill voids in Hiroshima 75 years after the atomic bombing—Recreating cityscapes: People were living and breathing on Hondori before atomic bombing 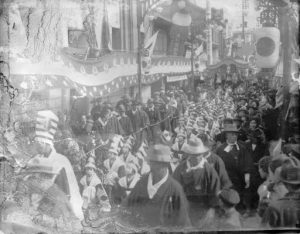 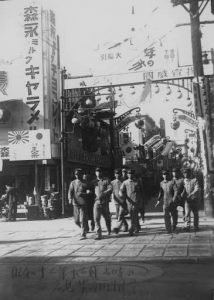 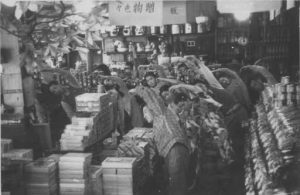 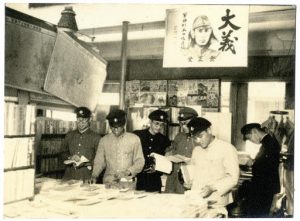 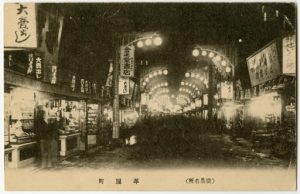 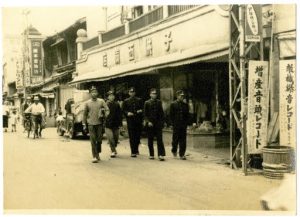 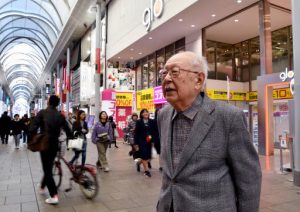 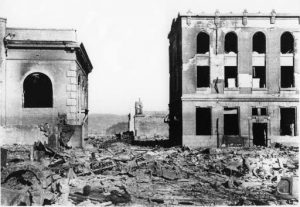 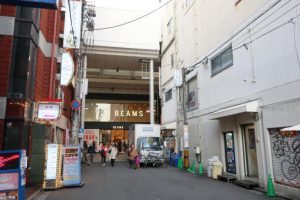 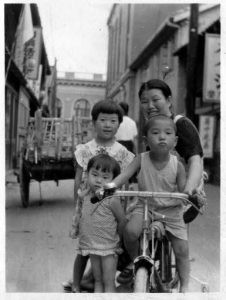 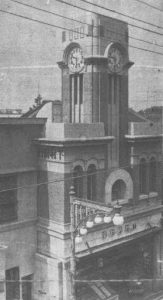 
One photo helped survivor recall memories of childhood home
In the instant the atomic bomb exploded in the sky above Hiroshima, the city was devastated, and many lives were lost. So were many photographs, in which were etched memories of friends and family. Some still look for a single shot capturing their home before the bombing. In 2020, a milestone year marking the 75th anniversary of the atomic bombing, the Chugoku Shimbun hopes to initiate an effort to better understand the overall picture of the city, which was erased in the atomic bombing, by shining a spotlight on photos. At first, we will take a look at how people lived their daily lives before the atomic bombing, by focusing on the Hondori shopping street, in Hiroshima’s downtown, and its surrounding neighborhoods, based on old photos of the area that have recently come to light.

It was the summer of 2019, when Hiroshi Okumoto, 89, a resident of Naka Ward, visited an exhibit of newly donated materials at the Hiroshima Peace Memorial Museum. He could not take his eyes from a photo depicting Hondori before the atomic bombing. On a store sign shown in the photo were the words “Okumoto Hardware Shop,” the name of his family’s store. “That’s our sign,” he said. In that way, Mr. Okumoto was reunited with his childhood home for the first time in 74 years, since the morning on that day.

Mr. Okumoto’s grandfather had founded the hardware shop at 12 Harimaya-cho, where he was born and raised. “Marutaka Children’s Department Store,” a toy shop three doors from his home, was an amusement park of sorts for him, where he could play with wood horses or on slides. “Kinshodo Books” near his home had a restaurant on the second floor where he and his family used to go. So many memories flooded back.

The Hondori shopping arcade, extending east to west in downtown Hiroshima, was the busiest shopping district in the region then, the same as today. However, as the government applied tighter controls on supplies because of the worsening war in the Pacific during World War II, shops on the street were closing down one after the other. Although Okumoto Hardware sold less and less due to the government’s campaign to forcibly collect metals from citizens, it managed to continue business by selling unglazed ceramic cooking ovens.

On Hondori, it is said about 160 shops were still open as of August 1945. The atomic bombing, however, burned everything to ash.

Mr. Okumoto, then a third-year student at the former Shudo Junior High School, experienced the atomic bombing about 4.1 kilometers from the hypocenter, the location at which he had been mobilized for work. The raging fires kept him from approaching the area around Hondori. On the following day, he finally arrived home, placing a piece of paper indicating “Hiroshi’s alive,” on a collapsed electric utility pole nearby. The house was located about 430 meters from the hypocenter. “The only thing I was thinking about at that time was that my family must have escaped somewhere else,” Mr. Okumoto said. He walked around the city for days.

Mr. Okumoto lost six family members in the atomic bombing, including his father, Yaezo, who was then 43. Only he and his grandmother survived. All that was left of his youngest sister, Taeko, 4, was a small pile of bones among the ruins of the store. The remains of Fumiko, 13, his other younger sister, as well as Katsuhiko, 8, and Naomichi, 6, two younger brothers, have never been recovered. He was reunited with his mother, Toshiko Okumoto, 38, at an evacuation center. She was suffering from severe diarrhea, and as he gently massaged her legs to ease her pain, she spoke her last words. “That’s enough, for now,” she said, dying eight days after the atomic bombing.

After the war ended, Mr. Okumoto lived at a relative’s home in the city of Takamatsu, Kagawa prefecture. But he held on to his wish of returning to his hometown of Hiroshima. Five years later, he returned to the place where his old home had stood, and managed a men’s clothing store on that site for about 40 years. He still lives at the same place, with the former store name written on his post box. The only memories he had of his home before the bombing were images that reappeared when he closed his eyes.

This “void” of information was filled by Takanori Masuda, 54, a company employee living in Asaminami Ward. Each time Mr. Masuda obtains a photo of Hiroshima taken before the atomic bombing, he has donated the image data to the Peace Memorial Museum and other organizations through auction websites on the internet, in the hopes that the data can help in such historical research efforts. The photo of the Okumoto Hardware Shop was one of those he has donated.

Shizue Masuda, Mr. Masuda’s mother, lived in today’s Tokaichi-machi area in Naka Ward, experiencing the atomic bombing when she was five. Five members of her family, including her parents, were killed. When Mr. Masuda was a second-year high school student, Shizue developed leukemia and died at age 42.

Wondering about what kind of city his mother had lived in, he began to collect old photos of Hiroshima. “I wondered if my grandparents had witnessed these same scenes,” he said. As some family member photos did not exist, he thought of them from time to time without knowing what they looked like.

Mr. Masuda is moved by the story of Mr. Okumoto’s reunion with his old home through the photo he donated. Mr. Okumoto once again visited the exhibit together with his two great-grandchildren, an elementary school student and a preschooler. He said, “They must have seen the photo with a real sense that they want to know more about my experience.”