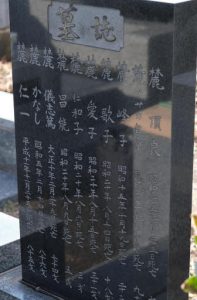 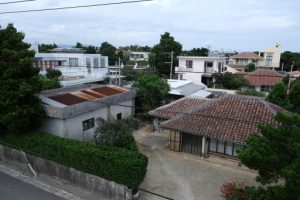 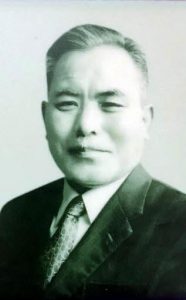 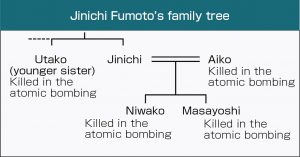 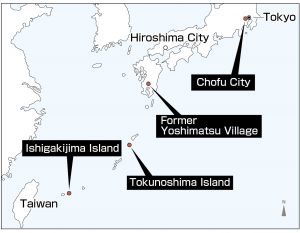 
Name written in anthology matched one on unclaimed remains list
A list of unclaimed remains stored in the Atomic Bomb Memorial Mound includes family names that are somewhat rare in Hiroshima. Can those unique family names be used as clues in the attempt to find surviving families? We carefully read information gathered from collections of notes left by family members of the A-bomb victims, as well as from testimony anthologies that other people had recorded.

The name “Niwako Fumoto,” which is the same as the name on the list of remains, was found in an A-bomb testimony anthology, published in 1995 by a group located in Hachioji, Tokyo, that passes on stories of the A-bombing experience. In the anthology, Jinichi Fumoto (who died in 1999 at age 85) talked about his oldest daughter Niwako, who was two years old at the time of the bombing. “The more I think of her, the more the tears well up.” He revealed with a heavy heart the last moments of the lives of four of his family, including his wife and children, the story of which he had learned second-hand.

Jinichi was born on the island of Tokunoshima, in the prefecture of Kagoshima. He moved to Tokyo where he worked as an elementary school teacher. After he and his wife Aiko married, the couple had Masayoshi, their first son, in 1941, and Niwako, their daughter, in 1943. His wife and two children were evacuated to what was the village of Yoshimatsu (now part of the town of Yusui) in Kagoshima prefecture, where their relatives lived, due to fears of an intensification of air raids by U.S. forces on Japan’s mainland.

Remorse and apologies to deceased family

In April 1945, U.S. forces landed on Okinawa’s main island. As Jinichi was concerned that the U.S. military might advance to Kagoshima, he asked his family to come to Tokyo. His wife and children left for Tokyo on the night of August 3, along with Jinichi’s younger sister, Utako. On August 5, on the way to Tokyo they disembarked from the train in Hiroshima, where Aiko’s father had once lived. The following morning, the atomic bomb exploded in the sky above.

They managed to escape from a collapsed house, but Niwako died that day, followed by Masayoshi and Utako. Before Aiko died at a first-aid station on August 15, she asked someone to pen a letter for her husband. In the letter, she said, “I truly, truly regret traveling with my two children and sister-in-law, leading them to their deaths. Forgive me, forgive me…”

In the testimony anthology, Jinichi’s feelings came to light. “I was wrong. It was my fault that I had asked them to come to Tokyo, and I beg their forgiveness.” He added, “I’ve had it with war.”

On the list of unclaimed remains stored in the memorial mound, Niwako Fumoto’s address is indicated as “Nakano-cho.” There was a district called Nakano in the central area of the village of Yoshimatsu.

We found Yuji Fumoto, 65, the second son of Jinichi, and visited his home in Chofu City, Tokyo. After listening to our explanation and saying, “That really happened?” Yuji was rendered speechless.

Jinichi remarried after the war ended. He raised two sons, including Yuji, and one daughter and served as the principal of a junior high school. He had the names of his deceased family members, including Niwako, inscribed on a tomb, which he faithfully visited each month. Nevertheless, he never spoke of his wife and children who died in the atomic bombing or of Hiroshima.

“Do you want to go to the grave together?” asked Yuji, and so we did. “I assume the remains must be Niwako’s,” he said. “I’m glad I could say that here, in front of the tomb.” Until this time, Yuji had been unaware of the testimony anthology that included his father’s story. He indicated his desire to begin understanding things by first touching on his father’s experience.

We flew to a remote Okinawa island, using as a clue a unique family name included on the list.

The Hiroshima Peace Memorial Museum in the city’s Naka Ward has archived a nameplate on which is inscribed “Seiichi Maekawara.” It is an A-bombed artifact of a family whose members were all killed in the atomic bombing. Meanwhile, the list of unclaimed remains kept in the memorial mound includes the name “Shunichi Maekawara.” After a check of the telephone directories throughout Japan, the family name Maekawara was found only in the village of Shiraho, in the city of Ishigaki, Okinawa prefecture.

After arriving at Shiraho, which is known for its coral reefs, we paid visits on foot to homes with a succession of nameplates reading “Maekawara.”

Teiko Maekawara, 51, younger sister of Sadatoshi Maekawara, said at Sadatoshi’s house, “Our family had nothing to do with Hiroshima. But you did mention the names Seiichi and Shunichi, right?” She was once told that three of her uncles, including Seiji Maekawara and Shuuichi Maekawara, had died in the war at places like Okinawa or the Solomon Islands in the South Pacific Ocean. Their remains have yet to be found.

Minoru Maekawara, 82, Teiko Maekawara’s relative who knew Shuichi and others, also indicated he did not know people with the name Maekawara who were killed in the atomic bombing. Minoru promised he would contact us if he found anything.

At our farewell, Minoru said, “Everything about war is terrible.” The comment recalled Jinichi Fumoto’s statement in the anthology “I’ve had it with war.” Hiroshima is not the only place where surviving families cannot bring back the remains of their loved ones.