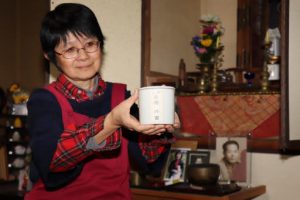 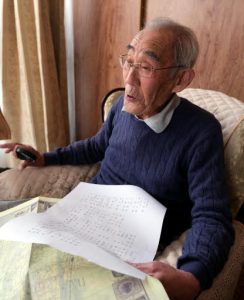 There is no Nojita family listed in Hiroshima prefecture’s telephone directory, and we thus expanded our search to other prefectures. We were able to find only one family in Japan with the surname Nojita. That belongs to Masanori Nojita, who lives in Okayama prefecture. Masanori’s father’s name was Sasaichi, but with different Chinese characters than those appearing on the list. “I think they wrote the wrong kanji,” Mr. Nojita said.

Seventy-five years ago, Masanori Nojita lived in Hirosekita-machi (now part of Hiroshima’s Naka Ward) with his family. “My dad kept many little birds. We often went fishing together.” He has plenty of memories of his father.

August 6, 1945, however, changed everything completely.

At that time, Mr. Nojita, in sixth grade at Hirose National School (now Hirose Elementary School), had been evacuated to the northern part of Hiroshima prefecture with other students. His father Sasaichi, then 56, his mother Masako, 44, and his sister Reiko, 8, were all in Hiroshima and died in the atomic bombing. His schoolteacher took Masanori Nojita around the first-aid stations near the city, but they could not even find remains of the family. At the ruins of his home, about 1.1 kilometers from the hypocenter, only a bath heater escaped the fire.

Mr. Nojita moved to Tamano, where his sister lived with the family she married into. His older brother, Masayoshi, became sickly after the atomic bombing and died in 1954 at age 24. “I didn’t have time to mourn the deaths of my family members because I had to work so hard to live.” Mr. Nojita worked at a shipyard and raised two daughters with his wife.

About 10 years ago, Mr. Nojita found his father’s name by chance on a poster on a wall in the Hiroshima Peace Memorial Museum in Hiroshima’s Naka Ward. It was the list of unclaimed remains of the A-bomb victims who have been identified and held in the Atomic Bomb Memorial Mound. He stared at the poster. He then visited the memorial mound located near the museum and quietly pressed his hands together in prayer.

Mr. Nojita considered coming forward to the city government of Hiroshima to claim that Sasaichi Nojita was his father and have the remains moved to Tamano. At the same time, he wanted to think of the Atomic Bomb Memorial Mound as a “family grave in his hometown of Hiroshima,” given that his mother and sister might also be at rest there. Mr. Nojita expressed his mixed feelings. “It might be best for ‘Sasaichi Nojita’ to be enshrined in Hiroshima.”

Mr. Nojita has been fighting stomach cancer. He started to share with his four grandchildren his experience, which he “did not want to talk about,” of being separated from his family and hometown by the atomic bombing. So long as the remains are in the memorial mound, he says that people who come to the park from all over can pray for his family. He believes the mound is a place for the Nojita family’s A-bomb memories to be passed on to his descendants.

There are just as many thoughts about the remains as there are bereaved families.

The remains of Osamu Takahashi were returned to his oldest son, Hisashi, 91, Nishi Ward, and Hisashi’s daughter, Kumiko Oki, 61, three years ago.

“Osamu Takahashi” was on the list, but one of the kanji characters of the first name was different. Hisashi contacted the Hiroshima City about the issue once. “It was the same pronunciation as my father’s name,” he said, but the inquiry ended unsuccessfully. Ms. Oki communicated and negotiated with city staff once again for her aged father, resulting in their wish finally being realized.

Ever since seeing the animated film “In This Corner of the World,” released in 2016, “my feelings for my grandfather, who lived in former Nakajima Honmachi right under the hypocenter, grew immensely,” something that motivated her. “The remains of the sturdy man in his prime” had been moved from the Atomic Bomb Memorial Mound to the family grave. “When my father passes, he can stay with my grandfather for eternity,” said Ms. Oki.

Ms. Oki grew up being told that the memorial mound is another “family grave.” She feels anew the weight of the remains of “about 70,000” unidentified victims. Each one had a name and a life. The remains of Hisashi’s brother, who died in the atomic bombing, have not yet been found.

The Atomic Bomb Memorial Mound is not as well-known as the Cenotaph for the A-bomb Victims, though they are both located in the Hiroshima Peace Memorial Park. Ms. Oki has started writing a children’s story about the memorial mound, because “I want more and more people to know what kind of place it is.” She hopes many people can visit the mound.