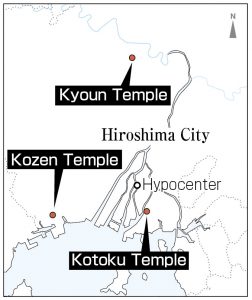 
Finding, informing families about remains stored at temples is huge challenge
Stepping inside the stone ossuary at Kotoku Temple in Minami-machi, Minami Ward, Hiroshima, we found the space filled with about 80 urns and wooden boxes wrapped in white fabric. On some of the urns and boxes, only a family name appears, such as “Yamane Family.” But on about 60 others, individuals’ names are written. Hiromichi Otou, 48, the temple priest, pointed at an upper shelf to his left. “I have heard those are the remains of people who died in the atomic bombing.”

The temple is located about 2.7 kilometers from the hypocenter. In the chaotic aftermath of the atomic bombing, remains of victims that appeared to have been cremated were found at the base of the Miyuki Bridge and in the park nearby and brought to the temple. Takao Hatakeyama (who died at 90 in 2004), a priest who suffered severe burns in the atomic bombing, faithfully prayed for the repose of the souls of the unclaimed remains.

Mr. Oto took over the temple work after Mr. Hatakeyama’s death. “I have heard bereaved families searching for remains frequently came to our temple in the past. But recently the number has dropped significantly.” He added, “I want to return the remains, but it’s really impossible for us to do so on our own.” He promised to continue steadfastly caring for the remains.

The Atomic Bomb Memorial Mound, located in Hiroshima Peace Memorial Park, in the city’s Naka Ward, holds the remains of about 70,000 A-bomb victims. Among those remains, 814 have information including names. Hiroshima City every summer composes a list of unclaimed remains with names. The list is posted in various places in Hiroshima and sent to local municipalities throughout Japan. The list information is also available on the internet.

Meanwhile, regarding A-bomb victims’ remains stored at local temples in Hiroshima, efforts similar to those carried out by the city to seek information about the remains are not being made. What can be done for the remains at Kotoku Temple?

The address of “Kiku Tanabe,” one of the remains’ names stored at the temple, is indicated as “Furukawa-machi, Jinseki District.” We visited the address, which is now called Furukawa in the town of Jinsekikogen.

At first, we met Tsukashi Sato, 90, an A-bomb survivor who lives in a town neighboring Furukawa. Mr. Sato experienced the atomic bombing when he was 15 years old, one year after he had left his hometown and entered a preparatory course for Hiroshima Normal School (now Hiroshima University). He knows the A-bomb survivors who live in the town well. “I don’t know the name even though many residents have the family name Tanabe around here,” Mr. Sato said doubtfully.

We walked around Furukawa with Mr. Sato to visit local residents and find clues. Ultimately, we did not meet anyone who knew of the name Kiku Tanabe.

Takehisa Yamamoto, 75, is head of an A-bomb survivors’ group in the town. “Was she involved with the Koujin Unit?” he queried. The unit was mainly formed of people in their 40s living in the former districts of Kounu and Jinseki during the war. A total of 300 members of the unit were mobilized for the war effort, and a full 90 percent were killed in the atomic bombing while they were helping dismantle buildings to creating fire lanes in Hiroshima. It is not known, however, whether female members had been present in the unit.

Another victim’s remains in the temple have the name “Chotaro Aoki,” with the address “Setoda, Toyota District.” We visited the district now called Setoda-cho in the city of Onomichi and looked for clues about Mr. Aoki. Responding to our request, Haruto Kajikawa, 92, and Suzue Murakami, 97, two A-bomb survivors living in Setoda, tried but could not recall any useful information.

Present situation needs to be understood

As we interviewed more people and gathered more materials, we found that the remains of A-bomb victims with names were stored in at least two more temples in Hiroshima other than Kotoku Temple. Regardless of whether the remains of those victims are held in the Atomic Bomb Memorial Mound or elsewhere, they are the same in that they were mercilessly killed in the atomic bombing and not returned to family. Would it not be possible to solicit more information about the remains of victims with names kept at temples?

“We have no basis on which to answer the question regarding to what extent the city should be responsible for finding surviving families for those unclaimed remains now,” said an official at Hiroshima City’s Atomic Bomb Survivors Relief Department. “We respect the fact that the temples are praying for the repose of the remains they keep.” Nonetheless, it should be possible to confirm the current condition of the remains.

It has been estimated that about 140,000 (plus or minus 10,000) people died in the atomic bombing of Hiroshima by the end of 1945. But the actual number of deaths from the atomic bombing that the city has verified through its Survey of Victims of the Atomic Bombing, which has gathered full names of A-bomb victims, is only 89,025. To the question about whether the city had been aware of the names of remains kept at Kotoku and other temples, the Atomic Bomb Survivors Relief Department responded that it would take time to investigate, with no answers immediately available.