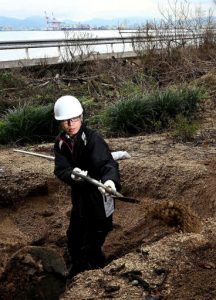 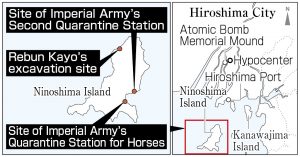 
Excavator of A-bomb victims’ remains: “Still some left”
Some call for Kanawajima remains to also be excavated
The island of Ninoshima, in Hiroshima’s Minami Ward, is a 20-minute ferry ride from Hiroshima Port, also in Minami Ward. Rebun Kayo, 41, a Hiroshima University graduate student, quietly shoveled soil on a vacant lot in the northwest part of the island. Finding a white fragment just as he pushed aside a clump of dirt with his hands, he showed it to us. “Looks like a bone, doesn’t it?” he murmured.

The site he was excavating is where island residents say atomic bombing victims’ remains were buried. However, it is not included among areas where the city government of Hiroshima is conducting excavation work in its own search for remains. Mr. Kayo persuaded the landowner to let him conduct the work, and since 2018, he has visited the island on his days off to himself search for A-bomb victims’ remains. To date, he has collected approximately 100 fragments, some of which were determined to be human bones by the Hiroshima Prefectural Police Department. Considering the depth of soil strata where the remains were found, the victims are assumed to have been buried around the time of the atomic bombing.

“There are still more A-bomb victim’s remains on Ninoshima Island,” said Mr. Kayo, who is from Okinawa. Some of his relatives were victims of the Battle of Okinawa whose remains have yet to be found. Mr. Kayo said he takes personally bereaved families’ desire to find A-bomb victims’ remains.


Estimates of 10,000 people
During 20 days after August 6, 1945, 75 years ago, countless people who experienced the atomic bombing were transported to Ninoshima and buried there after they died. That number is estimated to have been about 10,000 (according to the Record of the A-Bomb Disaster, issued by Hiroshima City). Most of the remains were never returned to family.

Ninoshima is an island that symbolized Hiroshima as a military capital since Ujina Port (present-day Hiroshima Port) became a major base for military transport during the Sino-Japanese War, which began in 1894, and thereafter the Russo-Japanese War. Immediately after the atomic bombing, the former Japanese Army’s Second Quarantine Station was turned into an emergency field hospital for the wounded. Although it was said there was a stockpile for 5,000 people, medication soon ran out, resulting in the deaths of many.

According to the Record of the A-Bomb Disaster, corpses were cremated en masse. So many bodies had to be cremated that they were either buried in pits in groups of 60 to 80 or carried into air-raid shelters. Junko Sawai, 79, a resident of Higashi Ward, talked about her older sister Nobuko Ihara, who died in the atomic bombing at age 13. “My mother received an envelope with the Imperial Army’s emergency quarantine station Ninoshima branch marked on it, but it contained only my deceased sister’s hair,” said Ms. Sawai.

After the end of the war, a memorial mound was constructed on Ninoshima. In 1955, the Atomic Bomb Memorial Mound was built at the Hiroshima Peace Memorial Park, in Naka Ward, and the remains of about 2,000 A-bombing victims were transported there. Since then, Hiroshima City has conducted work to excavate the remains on Ninoshima three times. In the 1970’s, the remains of an estimated 617 victims were found at the former site of the Japanese Imperial Army’s Quarantine Station for Horses, and seven were returned to family based on names indicated on cases for transportation passes and other items found nearby.

In a 2004 survey, remains of an estimated 85 victims were identified. A spokesperson for the Hiroshima City’s Atomic Bomb Survivors Relief Department is on record as saying, “The number of remains found was smaller than the number found in previous surveys, and we are therefore not planning further excavation work in the future.”

On the other hand, “Some bereaved families have a desire to see their loved one’s remains,” Mr. Kayo emphasized. “If the local government does not carry out the excavation work, I’ll do it myself.” Because Mr. Kayo does the excavation at his own expense, the work involves difficulties. In July 2018, when torrential rain hit the western part of Japan, the island of Ninoshima was significantly damaged, with large amounts of earth and sand flowing into his excavation site. His work had to be suspended temporarily as a result. Despite that, Mr. Kayo is “determined to respond to the chagrin of the A-bomb victims laid to rest under Ninoshima.”


What is Japanese national government policy?
The wounded were also carried to the island of Kanawajima, about one kilometer off the coast of the district of Ujina, where Hiroshima Port is now located. According to Hiroshima City’s the Record of the A-bomb Disaster, many of the approximately 500 casualties who were accommodated at the army’s transportation department dock ended up dying there. In 1952, the remains of 29 A-bomb victims assumed to have been buried on a coastal hillside were discovered.

Yoshiro Tanabe, 82, is a resident of Nishi Ward involved for many years in memorial services held on the island of Kanawajima. “My father’s remains may have been laid to rest on Kanawajima.” He heard the story that his father, Jiro, 52 at the time, had been transported to the island after the atomic bombing and died there. In 1998, his older brother took the lead in erecting a monument on the island as a memorial. “I want the remains on Kanawajima to be collected in order to convey the tragic reality that happened in Hiroshima,” said Mr. Tanabe.