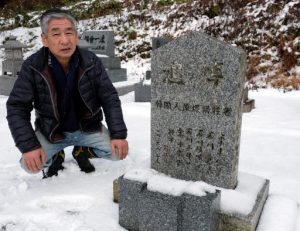 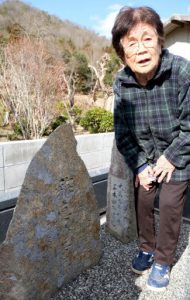 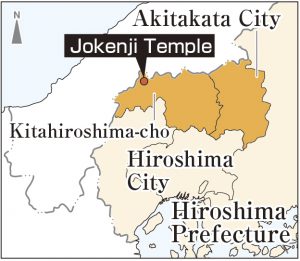 
Continued feelings of regret for A-bomb victims
Creation of gravesite and search for bereaved family
Japan’s national government has adopted a policy stipulating that the work of collection and return of the remains of atomic bomb victims should be left to local governments. On the other hand, some individuals work to return remains to bereaved families so they can “see each other again.”

Despite record-breaking mild weather this winter, the northern part of Hiroshima, located about a 90-minute car ride from the center of the city of Hiroshima, seemed a different world. On our visit to Jokenji Temple in the snow-covered landscape of Kitahiroshima-cho, the district of Asakita, we noticed inscribed on a monument kanji characters that read “Memorial for South Korean Atomic Bomb Victims.”

The monument was erected for a South Korean family of five who came to Hiroshima from the Korean Peninsula which, at the time, was under Japan’s colonial rule. The family of five died in the atomic bombing, including a woman by the name of Malim Lee, 43 years old at the time. The monument also serves as a gravesite for the remains of three members of the family. Some of the names on the memorial are typically Japanese.

The remains were left there by Bunkichi Ishikawa, Ms. Lee’s husband, before he returned to his homeland of South Korea after Japan’s defeat in World War II. He asked a temple priest to look after them. Shobun Joken, 69, the current chief priest of the temple, said, “Mr. Ishikawa is said to have worked at a nearby mountain as a charcoal maker.” A wooden pillar was originally used as a marker, but Mr. Joken’s late father later replaced it with South Korean granite.

Before leaving, Bunkichi said to them, “I’ll keep in touch.” Apparently, he never did. Worried whether Bunkichi was able to safely return to his country, in 1986, Mr. Joken asked a researcher he knew to conduct a search for Bunkichi. The clue was a community in Goryeong-gun, Gyeongsangbuk-do, which Mr. Joken had heard was Bunkichi’s birthplace. The search was able to confirm the whereabouts of Bunkichi’s oldest son and his wife, who were living in a mountain village that was inaccessible even by bus.

Living in the Geihoku area, Ms. Lee died in the atomic bombing of Hiroshima while visiting relatives in Kawaramachi (now part of Naka Ward). Ms. Lee’s second son, who was working for the Hiroshima Railway Bureau, as well as a relative and the relative’s child also died in the atomic bombing. Even after returning to South Korea, Bunkichi never recovered from grief over the loss of his wife and child and died in 1953.

Bunkichi’s oldest son and his wife spoke at that time of the situation with great regret. “We’d like to visit the monument sometime soon, but we’re so poor we can’t.” That was 34 years ago. With the thought that Bunkichi’s family suffered great hardship after returning home, the priest Mr. Joken continues to hold memorial services for the family in front of the monument that was passed down from his father.

In Yoshida-cho, the city of Akitakata, east of Kitahiroshima-cho, Chizue Miki, 91, cares for the grave of a small boy. While still alive, her father-in-law, Shihei, inscribed “A-bomb Orphan—Secular Name Susumu” on the boy’s gravestone and placed it in the family’s gravesite next to his home.

On August 7, 1945, one day after the atomic bombing, the boy Susumu was transported to a temporary relief station on a truck carrying the wounded. It was a time when many A-bomb casualties were being transported to temporary relief stations located in various places outside the city limits of Hiroshima, whose municipal functions had been decimated in the atomic bombing.

The boy seemed to have been separated from his parents, and no one knew his name. But he quickly took a liking to Shihei, who was providing aid to the wounded, and began to follow him around. Shihei felt compassion for the boy and received permission to take him to his home on August 9. Although the boy had wounds on his forehead and chest, he enjoyed eating the food provided him. He pointed to a picture of a military man holding a sword in a picture book and cried out, “Father.” When he saw a horse, he happily proclaimed in the third person, “Susumu wants that horse.” Shihei thus tentatively named the boy Susumu.

Shihei carried the boy on his back every day to have his wounds treated at the relief station. On August 15, however, Susumu’s condition took a sudden turn for the worse, and he died crying out, “Daddy,” “Mammy.”

Shihei inscribed the boy’s name Susumu on the gravestone and buried his remains. Shihei went to Hiroshima many times to search for the boy’s bereaved family in the city. Looking back on those days, Chizue recalled that until the time Shihei died in 1970, he would often say, “Susumu was such a sweet child.”

Chizue’s feelings were published in the Chugoku Shimbun (July 28, 1973) in an article titled “I want the remains to be returned to family.” In the summer of 1975, a former soldier living in Kobe who had lost his wife and child in the atomic bombing claimed that the boy was his son, Susumu Fujita, who went missing at the age of three.

Susumu’s remains were returned to the family, but Chizue asked to leave some of Susumu’s remains in the gravesite that Shihei had built. Even now, every morning, she puts her hands together in prayer to mourn the loss of Susumu, while feeling deep regret for all the children who still are not returned to family.