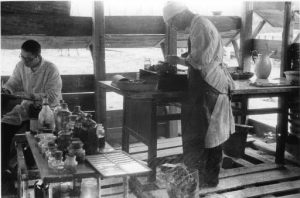 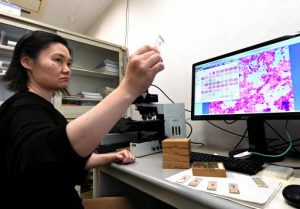 
Specimens show traces of acute symptoms
A photograph depicts Dr. Chuta Tamagawa, then a professor at Hiroshima Prefectural Medical School (now Hiroshima University School of Medicine), carrying out pathology autopsies of A-bomb victims in a makeshift hut standing next to Hiroshima Teishin Hospital (now in Naka Ward). The photo was taken in October 1945.

Yoshio Sugihara, a medical student at the time, witnessed Dr. Tamagawa’s post-mortem examinations. He described the situation in his memoir Wrath of a Pathologist. On September 20, the body of a baby born prematurely at eight months was carried into the hut from the hospital ward packed with the wounded. The next morning, the body of the 39-year-old mother was brought in. “Now, say ‘good-bye’ to your mom,” said the father, whose eyes filled with tears as he admonished his son, who looked to be in the third grade.

“I couldn’t hold back my hatred.” Dr. Sugihara directed his anger at the United States in his memoir. In the fall of 1945, a large amount of pathology specimens and other materials from the A-bomb victims had been collected by the United States, with Japan under occupation after World War II. The materials were returned to Japan in 1973, and the materials regarding victims of the Hiroshima atomic bombing are now stored at Hiroshima University’s Research Institute for Radiation Biology and Medicine (RIRBM), in the city’s Minami Ward.

Reading through the pages of the report made by RIRBM after the material was returned, we found names on the list that match the ages, date, and place of the autopsy of the mother and baby described in the memoir. Specimens of their organs were taken away to the country that had dropped the atomic bombs.

About 11,000 items of the “material returned from the U.S. military” are related to the victims of the Hiroshima atomic bombing. Among the glass slides of internal organs or bone marrow from 669 victims, about 4,000 slides for 105 people, including the aforementioned mother and child, are specimens from dead victims autopsied by the end of 1945. These materials, obtained within just a few months after the atomic bombing, are considered extremely rare. Sayaka Sugihara, 45, assistant professor at RIRBM’s Division of Radiation Information Registry, analyzed bone marrow specimens of 49 people and confirmed anew that the acute symptom of inability to produce normal blood cells was clearly identified in the victims, who had died within three or four weeks after exposure.

Researchers, however, are alarmed at the deterioration of the materials. Ms. Sugihara said, “We must save the images while we can still see them. Otherwise, we will lose the evidence supporting the diagnoses made immediately after the bombing.”

She showed a slide of bone-marrow preparation magnified under a microscope. Normally, megakaryocytes, the source of platelets, turn clear blue-violet when a reagent is added. However, the colors on the slide have become faint, making it difficult to distinguish megakaryocytes from surrounding tissues.

RIRBM aims at saving the specimens in the form of digital images. A scanner made specifically for this purpose would cost a minimum of several million yen. RIRBM submitted its budget request through the Ministry of Education, Culture, Sports, Science and Technology for fiscal 2017 for the archiving of various A-bomb related materials housed at the organization, but the request was rejected.

Satoshi Tashiro, 58, director of RIRBM, regrets the government’s decision. “Under the present situation in Japan, it’s difficult to have a budget request approved unless research is expected to produce early results.” The organization is now seeking a means of raising funds on the internet through crowdfunding.

A life etched onto a glass slide

Into each slide is engraved the life of a victim who had a name and a family.

To classify the materials, the U.S. military sequentially numbered the items related to the victims of Hiroshima bombing, beginning with the number “25.” When the materials were returned in 1973, the Hiroshima City government disclosed to the public the names recorded in roman letters. One of them was “YUKIMURA Juro,” with the serial number “259117,” leading to a relative coming forward to claim the material.

Following up on a clue in the print media from that time, reporters tracked down a nephew of Mr. Yukimura. According to Hideo Mangoku, 85, Kyoto, 48-year-old Yukimura and his wife experienced the atomic bombing at their restaurant in Yagenbori (now part of Naka Ward), about one kilometer from the hypocenter. Mr. Yukimura could not rescue his wife from under the collapsed building and ran for safety in tears. Mr. Mangoku said, “My uncle searched amongst the burned ruins day after day, but couldn’t find her remains.”

Purple spots soon appeared over Mr. Yukimura’s body, and his hair fell out. He died on September 10, about one month after the bombing. There was no way at the time of treating unknown symptoms. When a medical team from Kyoto University sought approval for a pathology autopsy of Mr. Yukimura, Mr. Mangoku’s father agreed. “If it helps the research,” he responded.

Among the materials returned from the United States were a medical record and 15 slides related to “259117.” It should be the duty of the A-bombed cities and Japan to do everything possible to preserve the materials and to pass on the effort to uncover the true consequences of the atomic bombing to future generations.