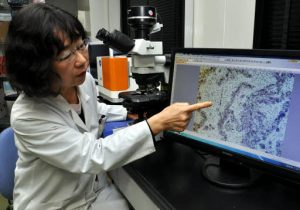 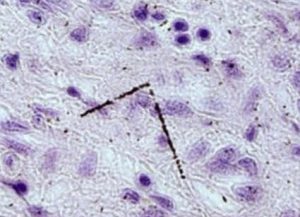 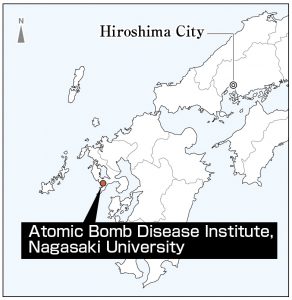 
Traces of internal radiation exposure run through cells
“Analysis of old samples possible”
In the chaotic aftermath of the atomic bombings, researchers and medical workers conducted autopsies on victims and left pathology specimens for clarification of the reality of the damage caused by the bombs. Some of the samples are said to have greatly deteriorated. How and to what extent can these scientific resources collected many years ago be utilized?

Nagasaki also experienced an atomic bombing. The Nagasaki University campus is located about 400 meters to the east of the Atomic Bomb Hypocenter Park. This reporter visited the university’s Atomic Bomb Disease Institute, where 23,000 materials related to Nagasaki are stored, including slide samples. They are among the materials confiscated by the U.S. military during the occupation and returned to Japan.

Kazuko Shichijo, 62, assistant professor at Nagasaki University, showed a slide sample of lung tissue magnified under a microscope. Thin black lines run through several cells. The longest line is about 25 microns. “These are the traces of where alpha rays traveled,” Dr. Shichijo said. From the particular characteristics of the lines, they seem to have resulted from the Nagasaki A-bomb’s plutonium.

The United States military dropped a uranium bomb on Hiroshima on August 6, 75 years ago. Three days later they dropped a plutonium bomb on Nagasaki. People were directly exposed to radiation from the bombing externally, as well as internally by inhaling particles contaminated with radiation. Compared to direct exposure, not much is understood about internal exposure. After staying in the body, radiation is ejected from the body through urine, and so on. With the passage of time, it is said that confirmation of whether someone was exposed to radiation in this way becomes more difficult.

Among the materials returned from the U.S. military, Dr. Shichijo used paraffin block samples of tissues from seven victims’ lungs and kidneys. The victims were about 0.5 to one kilometer from the hypocenter at the time of the atomic bombing and died within four months. Thin slices of tissue were put on slides, placed in an emulsion, and stored in a dark room. After six to 10 months, the traces became visible.

“With modern technology, we can conduct research as if we had traveled back to a time immediately after the atomic bombing.” Dr. Shichijo and her colleagues made this finding public in 2009. This was the first example of detection of traces of residual radiation in pathology specimens. Their research findings drew attention from those who had entered the A-bombed cities shortly after the bombings or who had been exposed to so-called “black rain” containing radioactive fallout.

Research institutions in the A-bombed cities have in their possession blood and various other biosamples, in addition to materials returned from the U.S. military. It is said to be difficult to keep such biosamples for an extended period of time. When organ samples are kept in formalin for a long time, for example, their DNA can decompose into small pieces, making their use in research difficult.

But there is good news. Yumiko Nitta, 61, professor at Hiroshima Shudo University, studied organ samples kept in formalin about 20 years ago, when she worked at Hiroshima University’s Research Institute for Radiation Biology and Medicine. She found that organ cells can be analyzed even after 32 years using special equipment, following removal and propagation of specific genes from DNA fragments. Methods of sample preservation change as science and technology advance.

On the other hand, for families, such biosamples and specimens are “extensions” of the bodies of the victims. The families have mixed feelings, since the samples are parts of their deceased family members. When those samples were returned from the U.S. military to the A-bombed cities in 1973, A-bomb survivors demanded that organ samples be returned to the victims’ families.

The predecessor to the Radiation Effects Research Foundation (RERF), located in Hiroshima’s Minami Ward, was the Atomic Bomb Casualty Commission (ABCC), established by the United States two years after the atomic bombings. RERF has in storage numerous pathology samples obtained through autopsies, as well as serum and urine samples obtained through health examinations of survivors.

RERF purchased a large-scale freezer for storage of such samples from the United States in 2015. The equipment keeps biosamples at a temperature of minus 80 degrees Celsius. By storing the samples in this way over a long period, they can be used for cutting-edge collaborative research projects, including those designed to elucidate the mechanisms of cancer development. RERF formed an external advisory committee in 2018 to take into consideration the opinions of survivors and experts regarding the organization’s research plans.

Yukio Yoshioka, 90, secretary general of the Hiroshima Alliance of A-bomb Survivor Organizations, was one of the survivors examined by ABCC when young. “I was manhandled when they examined me.” At that time, ABCC was closely connected to military research. Even now, he has a hard time wiping away his feelings of mistrust. When asked whether he would assent to scientific use of the biosamples, Mr. Yoshioka said, “Only if they are used for research to help those harmed by radiation such as cancer patients.” Essential in this effort are that the aims of any such research be carefully explained and that the research results be returned in good faith in some form for the benefit of people.