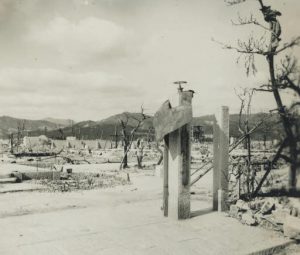 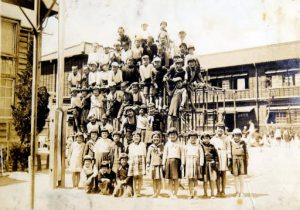 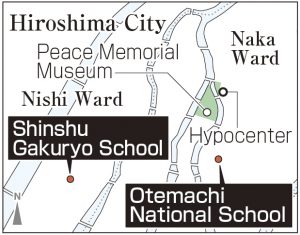 
7,000 items collected from overseas reveal clear picture of damage
A photograph shows stone pillars standing in the burned ruins of Hiroshima. The photo was taken by a legal officer of the U.S. Marine Corps in the fall of 1945, after the end of the war. The characters written in black ink on a wooden board hanging from one of the pillars was recognized when the photo was enlarged on the computer screen by Ryo Koyama, 39, a curator at the Hiroshima Peace Memorial Museum, located in the city’s Naka Ward. The board reads “Otemachi National School, Temporary Office.”

“Behind these front gateposts, you can see swings,” Mr. Koyama said. He and his colleagues found the photo at the U.S. Marine Corps History Division in the U.S. state of Virginia in 2017. It was the first time the Peace Memorial Museum had obtained a photo of the charred remains that can be clearly identified as the Otemachi National School.

Since the school was forced to close because of the atomic bombing, not many materials about the school exist today. According to the Record of the Hiroshima A-bomb War Disaster, the wooden buildings of the school, located 1.1 kilometers from the hypocenter, were completely destroyed and burned to the ground. Thirty-five students died as a result of the bombing and 181 went missing or could not be contacted.

Japanese photographers took photos of Hiroshima after the atomic bombing, but the number of photos is limited. Most people who lost their homes and families could not even think about taking photographs, because surviving was all they could manage. On the other hand, the U.S. military sent a joint Japan–U.S. survey team and the U.S. Strategic Bombing Survey to Hiroshima to take photos from the ground and air to record the effectiveness of the bomb from a military standpoint. Members of the British Commonwealth troops stationed in the city of Kure also took photos of Hiroshima.

The Peace Memorial Museum began sending staff overseas to collect new materials related to the atomic bombing in fiscal 2013, for the first time in 39 years. By the end of fiscal 2019, more than 7,000 items, mostly photos, were collected in such places as military-related museums in the United States, the United Kingdom, and New Zealand.

Hiroshima City, for itself, organized and carried out the project without support from the Hiroshima Prefecture government or the national government. On a limited budget and during a limited time, staff continued taking photographs and scanning materials with a single-minded purpose. After returning to Hiroshima, they identified when and where each photo had been taken. Collecting the photos was not the end of the project, however. By comparing the photos with those taken before the atomic bombing, the staff will work to uncover the “voids” in the reality of damage caused by the atomic bombing.

What will be done with the photo of the burned ruins of the Otemachi National School? The museum indicated it did not have in its archives the essential photo of the school from prior to the atomic bombing.

This reporter then recalled that Chiyuki Kakei, 90, a resident of the city of Higashihiroshima, attended the school in Otemachi. She lived in the former Tenjin-machi area, which was around the present-day Hiroshima Peace Memorial Museum. Her parents and home were lost in the atomic bombing. She still carefully holds on to several photos, including one that shows her and her classmates surrounding a jungle gym on the school grounds and another that shows her playing on a swing.

We showed Ms. Kakei’s donated photos to Mr. Koyama. He fixed his eyes on the photos. “The atmosphere of the school buildings and children’s smiles touch me,” he said. In this way, by linking materials collected by the museum and those owned by individuals in the city, the “voids” can be filled.

The Shinshu Gakuryo School, located in Nishi Ward, is a private school affiliated with the Jodo Shinshu school of Buddhism. The wooden lecture hall and the dormitory of this school were used as temporary relief stations after the atomic bombing. The buildings still exist. Kimie Murayama, 80, took refuge at the school immediately following the bombing. Having read the A-bomb account of Ms. Murayama, a resident of Bunkyo Ward in Tokyo, some people reported to the city government that the buildings had apparently survived the atomic bombing.

We had Ms. Murayama take a look at the aerial photo. “Horrible is all I can say,” she exclaimed. “It was an unbearable sight, with injured people suffering in agony on straw mats laid all over the school ground.”

The photo was recorded by the side in World War II that boasted of the power of the atomic bomb. When a U.S. military member’s relative sent the photo to the U.S. Marine Corps History Division, it was accompanied by a letter indicating their new home did not have space to keep the photo and that it could be thrown away if it did not interest them, according to Mr. Koyama, who heard the story firsthand in the United States. Now the photo has become new material with which to convey the tragedy that occurred in Hiroshima that day. Ms. Murayama hopes that the school and the aerial photo will be used to promote peace education.