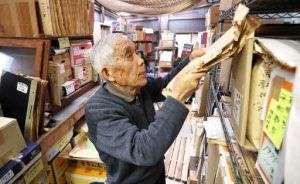 
Passing down suffering and history
Where documents can be stored is key issue
Huge amounts of materials fill the book storeroom and the Japanese-style room on the first floor, the study on the second floor, and the warehouse in the garden. The floors feel as if they could cave in. Some of the materials are kept in cardboard boxes with labels attached.

Hiromu Morishita, 89, an A-bomb survivor, began sorting these materials at home two years ago. The former teacher said quietly, “I’ve collected all these materials to maintain facts and records.” With their three children living elsewhere, Mr. Morishita lives with his wife Hisako, 82, at their home in Hiroshima’s Saeki Ward.

The materials include newspaper clippings, books, and notebooks. They tell stories of an A-bomb survivor who experienced suffering but cultivated connections with the world and of a teacher who put his heart into peace education. The materials represent not only his personal history but also a record of Hiroshima’s post-war era.

Mr. Morishita was 14 and a third-year student at First Hiroshima Prefectural Junior High School (now Kokutaiji High School, located in Naka Ward), when the atomic bomb was dropped. He was about 1.5 kilometers from the hypocenter and suffered burns on his face and limbs because of the bomb’s intense heat rays. His mother was killed in the atomic bombing. After the war, he developed tuberculosis. And at age 24, after graduating from Hiroshima University, he became a calligraphy teacher. He tended to be reserved with his students out of concern about the burn scars on his face.

A turning point in his life arrived in 1963, after he got married and his wife gave birth to their first daughter. Looking at his daughter’s innocent face while she was asleep, he remembered the charred bodies of children left lying in the devastated ruins of Hiroshima. He thought, “Such a thing must never happen again. I need to take action myself.” In those days, the world feared a possible nuclear war between the United States and the Soviet Union against the backdrop of the previous year’s Cuban Missile Crisis.

In 1964, he joined the World Peace Pilgrimage organized by Barbara Reynolds, an American peace activist, and toured Europe and the United States. This was an unprecedented project in that A-bomb survivors themselves revealed their wounded bodies to the audience and delivered their messages overseas. In America, the group met former U.S. President Harry S. Truman, who had authorized the use of the atomic bombs. In his later notes, Mr. Morishita wrote, “Didn’t he realize there were many young lives?” The memo reveals his anger and frustration.

Mr. Morishita was involved in the World Friendship Center (WFC) from the beginning. The WFC, an NPO located in Nishi Ward, was established by Ms. Reynolds in 1965 and remains a hub of peace messaging and international exchange. Mr. Morishita served as its chairman for many years. On his bookshelves are around 70 volumes of the group’s meeting minutes and newsletters. He also has numerous documents about peace education. Believing that high school textbooks contained insufficient information about the atomic bombings, he devoted himself to researching related educational materials. When he was in his 30s, he began conducting a survey on high-school students’ attitudes about peace. The survey spread to other schools, both inside and outside Hiroshima Prefecture. From the responses, changes in student attitudes after the war can be understood.

Mr. Morishita also surveyed the attitudes of his 35 former classmates at junior high school. He wanted to learn what had happened to each of them on August 6, 1945, and what thoughts they had since then. He asked them about their experiences of the atomic bombing and their lives after that. The survey was designed to obtain an overall picture of the extent of damage to the school from the atomic bombing, which killed 353 students and 16 teachers.

Disposed of due to lack of storage options

Since that day, 75 years have passed. Mr. Morishita hopes the materials will be utilized after all those who experienced the atomic bombing have died. But the future home for the cardboard boxes is as yet decided.

Other A-bomb survivors must be trying to decide what to do with similar materials as they plan for the end of their own lives. But public organizations are not always ready to accept personal materials. More than a few documents are being discarded by A-bomb survivors themselves or by their families. Some information is related to the hidden physical and psychological suffering that survivors might hesitate to disclose.

Akiko Kubota, 49, assistant professor at the Hiroshima University Research Institute for Radiation Biology and Medicine (RIRBM), is in charge of document management. “In passing down A-bomb experiences to the next generation, we should include to the extent possible the survivors’ reluctance to convey their experiences,” she said, based on a thorough understanding of the complexity of their circumstances.

Such materials are “witnesses” that can transcend different eras. While new materials have been discovered, some have been scattered or lost. “Any lack of materials could later be misinterpreted as evidence that no such facts existed,” said Ms. Kubota. Might it not be the present generation’s mission to make sure the “voids in Hiroshima” are not enlarged further?