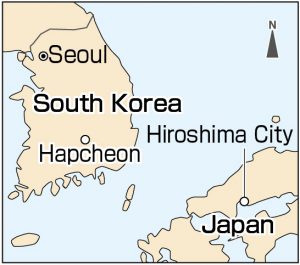 On June 7, it became clear from records kept by an A-bomb survivors’ organization in South Korea that a considerable number of Korean A-bombing victims who had died by the end of 1945 are not included in a statistical survey conducted by the Hiroshima City government. The Koreans came to Japan from the Korean Peninsula when it was under Japanese colonial rule.

The Chugoku Shimbun obtained permission from the Hapcheon Branch of the South Korean Atomic Bomb Sufferers Association to look through a number of documents kept by the group, including a personal history of about 250 members considered to have been compiled in the early 1970s. After extracting the names of Hiroshima A-bombing victims, we made inquiries to Hiroshima City regarding 11 of the victims whose bereaved families provided us with a letter of proxy, or whose stories were supported by such evidence as a death certificate or other administrative records.

Hiroshima City has carried out the Statistical Survey of the Atomic Bomb Victims since 1979, based on which the government collects and accumulates the names of A-bomb victims. According to the city, names and birthdates completely matching those of the 11 Koreans were not found in its survey data.

Used for the survey are information collected from the documents such as applications for Atomic Bomb Survivor’s Certificates, which indicate the situation of applicant family members at the time of the atomic bombing, and a register of mobilized students who died in the atomic bombing. However, data kept by A-bomb survivors’ groups or public organizations overseas do not fall under the survey’s purview. The city said it will consider utilization of such information in the future.

A-bomb survivors living overseas were not eligible to receive aid from the Japanese government until 2003. Itsuji Kono, section manager of the city’s Atomic Bomb Survivors Relief Department, explained, “We’re not sure why the names were not found in our survey. It is true, however, that there was a time when obtaining information about A-bomb survivors living outside Japan was difficult.”

At the time of the atomic bombing by the United States, many Koreans had come to Japan from the Korean Peninsula to escape poverty or were forcibly recruited to work for Japanese companies. Junko Ichiba, a resident of Toyonaka City, Osaka Prefecture, is chairperson of the citizen’s group Association of Citizens for Supporting South Korean Atomic Bomb Victims. She said, “They were victims of Japan’s national policy of Korean colonization and war. Even after they survived the A-bombing, the survivors were forced to endure hardship. Taking history into account, the Japanese government itself should work to clarify the devastating consequences of the atomic bombing for that population.”