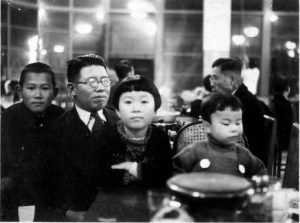 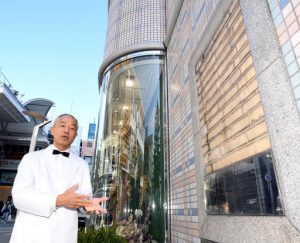 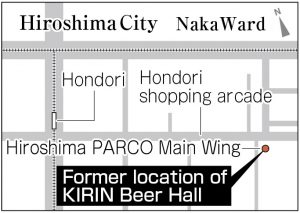 
Food and drink provided families with relaxation
Shadows of war evident in daily life
“So, there are photos?” Yutaka Shigetomi, 57, the owner of a beer stand and a resident of Naka Ward, exclaimed in surprise when the Chugoku Shimbun reporter showed him three photographs of the KIRIN Beer Hall in Hiroshima’s Hondori shopping arcade in the city’s Naka Ward. The photos show the inside of the hall before the atomic bombing of Hiroshima. The Kirin Brewery Company, Limited (in Tokyo) responded it did not have any photos of the KIRIN Beer Hall taken before the atomic bombing.

Mr. Shigetomi is known throughout Japan for his expertise in the art of pouring beer. He started researching about the KIRIN Beer Hall in 2017. One year on August 6, the anniversary of the Hiroshima atomic bombing, he had the opportunity to pour beer at a shop in Tokyo that sells local products from the Hiroshima area. For the occasion, he decided to make several exhibit panels portraying the atomic bombing and the reconstruction of the city to raise awareness of the atomic bombing from the perspective of beer, a familiar item to nearly everyone. Mr. Shigetomi had wanted to include photos of the beer hall before the atomic bombing but failed in his attempt to find any.

The hall with its contemporary design opened in 1938. It was a German-style restaurant popular among families for its beer and food. One of the photos taken in the year when the hall opened shows many well-dressed families. “This photo reminds me of the pleasure of going to a restaurant with family on a day of celebration,” said Mr. Shigetomi.

According to the Shinshu Hiroshima City History, when the alcohol rationing system began during World War II, the beer hall supplied about 70 percent of all alcoholic beverages available in Hiroshima City. Even in the evenings of March 1945, as many as 150 people of all ages lined up for beer holding coupons in their hands. On August 6, 1945, the interior was nearly completely incinerated, but the building managed to survive. The beer hall resumed operations as quickly as the end of that year.

Thinking about those difficult days, Mr. Shigetomi says, “Beer probably helped boost citizen’s hopes for reconstruction.” The beer hall building that survived the atomic bombing was demolished in 1991. There remains a monument that marks the location of the former beer hall on the outer wall of the Hiroshima PARCO Main Wing, which was erected on the site later.

The three valuable family photos were taken by the late Rokuro Suzuki, a barber in the neighborhood, and the photo albums had been kept by Tsuneaki Suzuki, 88, Rokuro’s nephew and a resident of the town of Fuchu-cho, Hiroshima Prefecture. Tsuneaki said that, on occasion, his relatives would sometimes meet at the hall to enjoy a meal.

The three photos include one of Rokuro’s niece, Kazuko Shintaku, and her father Itsugo. Kazuko went missing on August 6, 1945, while helping with house-demolition work. The bombing happened seven years after the photo was taken, when she was a first-year student at Hiroshima Prefectural First Girls’ High School (now Minami High School). “Kazu-chan was cheerful. She cared much for her parents and was good at the piano,” Rokuro said. “On the following day, her father Itsugo visited us to ask us of her whereabouts because she still had not come home. I will never forget his tears and heartrending voice.”

Rokuro’s albums contain about 2,000 photos, including those of the inside of a toyshop, a hat shop, and the front of a kimono shop. The photos show scenes of the Hondori shopping arcade and nearby areas, as well as the lives of Hiroshima citizens, and adorable children’s smiles. However, they also clearly show evidence of the wartime gloom.

Hachidorisha, a café in Naka Ward, Hiroshima, holds events at which visitors can consider the issues of war and peace. Erika Abiko, 41, the café owner, took an interest in Rokuro’s photos. While turning the pages of copied photos, she paid special attention to those portraying a banner with the words “national unity” and a scene of soldiers being sent to battle walking in front of a beauty salon with guns on their shoulders.

“War existed amid the daily lives of families that are not so different from our lives today. Isn’t it important to think about the past while looking at these photos and compare the people’s lives in those days to our lives today?” Ms. Abiko felt that way about the value of the photos taken before the atomic bombing for the youth of today.