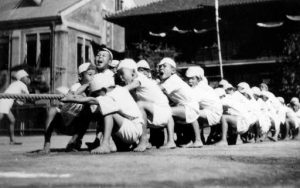 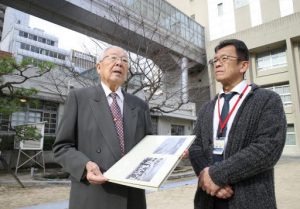 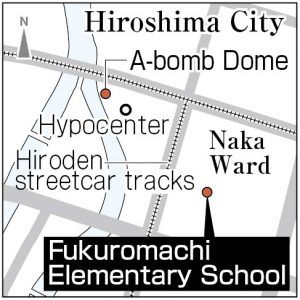 
Graduates of national school voluntarily organized graduation photo album
In a photograph, male students in white gym-class uniforms with caps compete enthusiastically in a tug-of-war competition. They are either third- or fourth-year students. The photo, taken in 1941 or 1942, is of a sports festival held at Fukuromachi National School (now Fukuromachi Elementary School, in Naka Ward). Boisterous voices of children seem to echo across the blue sky to the present day.

Almost all students at school died in atomic bombing

The school is located about 150 meters to the south of the present-day Hondori shopping street. Hirosyuki Imada, 87, a resident of Naka Ward who graduated from the school in the spring of 1945, several months prior to the atomic bombing, looked back and said with an air of nostalgia, “I don’t appear in the photo, but I remember hustling with my classmates, because my parents had come to see me.”

This photo is contained in a handmade graduation album that Mr. Imada and some of his former classmates voluntarily had put together in 1999 by collecting the photos they all had kept. An official graduation album was not available to them when they graduated, because of World War II. The time when the sports festival photo was taken coincided with the breakout of the fighting in the Pacific theater of the war. In 1943, the school’s sports festival was cancelled. On August 6, 1945, the school, located inside 500 meters from the hypocenter, was burned to the ground in the atomic bombing. Almost all of the students at school at the time perished.

Mr. Imada’s birth home was located in Sarugaku-cho, next to the current A-bomb Dome. As his father had been drafted into the army, Mr. Imada and other family members were evacuated to the village of Yahata-mura (now part of Saeki Ward) in the spring of 1945. But he himself was exposed to the atomic bombing around two kilometers from the hypocenter, suffering severe burns on his face and hands. By then, he was a student at Hiroshima Municipal First Technical School (now Hiroshima Prefectural Technical High School), and had headed to Minami-machi (now part of Minami Ward) to engage in work as a mobilized student related to the dismantling of buildings for the creation of fire lanes.

After the war ended, his father was discharged from military service and with his family, moved back to their home in the central part of Hiroshima. Mr. Imada worked hard, got married, and had a family. When he was in his 40s, he happened to meet in his neighborhood a former classmate of his at Fukuromachi National School and they came to have a conversation about the school. Wondering how many of their schoolmates had survived the atomic bombing, they began to trace the whereabouts of their friends from the past.

71 classmates found to have died in atomic bombing

Mr. Imada investigated the whereabouts of his male classmates, while Kazuko Shishido, his former classmate, helped by confirming the status of the female classmates. The two were finally able to connect with about 60 people and compile an address book. With the former classmates, they planned and organized a school excursion and creation of the graduation album. The album’s title is “Bouei” (Hat Shadows), named after lyrics from the school song. The album contains photos of various school events: an offering of prayers for safety of the first-year children who just entered the school, which was held at Shirakami-sha Shrine; their sports festivals; and a group photo of students in the sixth grade. In addition, based on cenotaphs in schools that the former classmates had entered after graduating from the national school and other such information, Mr. Imada and his former classmates looked for names of other classmates who had been killed in the atomic bombing and listed their names in the album. They found that 71 former classmates had died as far as they could discern. Knowing that such a large number of their old friends had died in the atomic bombing profoundly saddened them.

More than 20 years have passed since they put together the album. Ms. Shishido continued to console the souls of 223 former classmates at her other alma mater, Hiroshima First Prefectural Girls’ High School (now Minami High School), killed in the atomic bombing, but she passed away in August of last year. More than a few of Mr. Imada’s other friends with whom he celebrated their reunion have already died.

In December last year, Mr. Imada visited the school he had graduated from and stood on the school grounds. Holding the photo album in his hand, he spoke with Tadakatsu Fukuda, 53, the school’s principal. “I remember my school days here. I wanted to make a photographic record of my classmates who had studied here and keep it for the future,” he said. “I thought it was my duty for those who were able to survive the atomic bombing.” Mr. Imada donated the photo data of his album to the Peace Memorial Museum, in Naka Ward, last year.