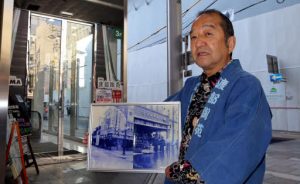 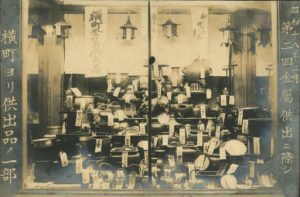 
History remains in hands of Hiroshima’s citizens
Surprise at photos found in tea ceremony chest
At the start of the exhibit section of the Hiroshima Peace Memorial Museum, which finished renovations in April 2019, are displayed photographs of Hiroshima’s downtown taken before the city was destroyed in the atomic bombing. According to museum staff, the photos help visitors comprehend the damage caused in the atomic bombing, when pre-bombing photos are compared with the catastrophic images taken after. Commemorative family photos with images of the city in the background are valuable for aiding understanding of what happened in Hiroshima.

Believing that Hiroshima citizens still have more photos not held by public organizations such as the Hiroshima Peace Memorial Museum, we took a stroll along the Hondori shopping district.

“It was a fancy three-story building,” said Satoshi Watanabe, 67, as he showed us two photos of the front of his shop taken before the atomic bombing. Mr. Watanabe is the chairperson of Watanabe Toen, a tableware specialty shop located in the Hondori Hills building. His grandparents once operated the business on the same site under the name Watanabe Copperware.

The shop building was destroyed and his family killed in the atomic bombing. His grandfather Iwasuke, then 67, his grandmother Sono, 66, and his aunt Kiyoko, 43, all went missing and their remains were never found. Mr. Watanabe’s uncle Yoshinori, 29, who was in the city center at the time, was also killed.

After World War II, Mr. Watanabe’s father Isao (who died at 86 in 2010) returned to Hiroshima from Tokyo, where he had been studying, and worked with relatives to reconstruct the shop. Mr. Watanabe took over the business from his father. “I had thought that the photos taken before the atomic bombing had all been burned,” he said. However, in 2006, while he was organizing a warehouse used when the Hondori Hills complex was being constructed, he was surprised to find photos in an old tea ceremony chest. The images had been taken to a relative’s house outside the city before the atomic bombing, and as a result escaped being incinerated in the fires.

One of the photos shows a bank building located across the street to the west of Watanabe Copperware. Around 1945, that was the Hiroshima Branch of the Imperial Bank. The bank building continued to be used after the atomic bombing and, in 1967, became the Andersen Bakery (now Hiroshima Andersen). The Andersen building is presently being reconstructed, but parts of the exterior wall exposed to the atomic bombing remain. The two photos show the former appearance of the Hondori shopping street and provide a sense of its history. Mr. Watanabe has placed the photos behind his cash register, where they can be readily seen by customers.

Only one photo remains of Kishiyodo, an emblem and badge shop managed by Makoto Kumano, 71. It is a photo of the storefront taken in 1939. In those days, the shop made military uniforms and sold badges for use on caps or uniforms.

Mr. Kumano’s great grandfather Hidekichi, 70, his grandmother Emiko, 42, and his three aunts and several live-in employees were all killed in the atomic bombing. While thinking about reconstruction of the shop and gazing at a photo, Mr. Kumano, born after the war, says, “We lost everything in the atomic bombing, but we recovered.”

Kisada Foods (now Kisada Musical Instruments), located at the west end of the shopping street, displays a photo illustrating the regulation forcing citizens to provide the government with metal objects during the war. The photo shows pots, pans, and kettles piled up in one corner of the store. Izumi Kimoto, 77, a resident of Hatsukaichi City and a grandson of the late Sadakichi Kimoto, the store owner in those times, said, “My grandfather was a board member of the local neighborhood association, and each household would have brought their pots, pans, and kettles to his store.”