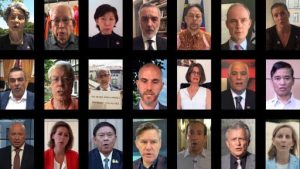 On July 20, the Mayors for Peace organization (for which Hiroshima Mayor Kazumi Matsui serves as president) created an approximate seven-minute video for people who cannot visit Hiroshima due to the coronavirus pandemic. The video contains messages from 23 people including the mayors of Hiroshima and Nagasaki cities, A-bomb survivors, and representatives of several countries. The video production is part of the atomic bombing’s 75th anniversary project, and the video is now being distributed on the “YouTube” video-sharing website and others.

Yoshiko Kajimoto, 89, a resident of Nishi Ward, talked about her A-bomb experiences as follows in the video. She was exposed to the atomic bomb at a munitions factory where students were mobilized, when she was 14 years old. Eighteen months later, she lost her father, and her mother suffered from the effects of radiation for 20 years. Glass fragments pierced into Ms. Kajimoto’s body, and she also developed cancer. “Atomic bomb survivors are still suffering to this day,” she said in front of the A-bomb Dome (Naka Ward).

Mayor Matsui strongly insists that all nations must take actions from global humanitarian aspects, not from self-centered nationalism, toward the abolition of nuclear weapons. The video also contains messages from Izumi Nakamitsu, the U.N. Under-Secretary-General and High Representative for Disarmament Affairs, as well as representatives from 14 member cities in 14 countries including the United States and Russia.

At the end of the video, all 21 participants, except for Hiroshima Mayor Kazumi Matsui and Nagasaki Mayor Tomihisa Taue, call on the audience for the concept of the project, “No More Hiroshima! No More Nagasaki!”

This video is also distributed on the Mayors for Peace Twitter and Facebook sites. The Hiroshima Peace Culture Foundation (Naka Ward), secretariat for the project, says, “We hope that as many people as possible click “Like” and make comments using the hashtag so a network of sympathetic followers for the abolition of nuclear weapons will be spread through the world.”