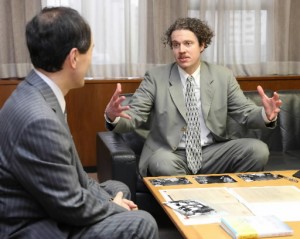 On April 6, a copy of a personal letter that was sent in 1985 by the late Akira Yamamoto, the former chairman of the Chugoku Shimbun, to the late John Hersey, the author of Hiroshima, the book written in 1946 which conveyed the horror of the atomic bombing to the world, was delivered to the company’s head office. The letter extends Mr. Yamamoto’s gratitude to Mr. Hersey for serving as a selection committee member of the Hiroshima International Cultural Foundation’s Akiba Project, which was established in order to invite newspaper reporters from other nations to visit Hiroshima and Nagasaki. Cannon Hersey, 37, the grandson of John Hersey and a resident of New York, is now visiting Hiroshima and he handed the copy of the letter to Jiro Yamamoto, the current chairman of the Chugoku Shimbun.

The letter is dated October 16, 1985 and was signed by Akira Yamamoto, the president at the time. It mentions Mr. Yamamoto’s delight and appreciation in regard to Mr. Hersey’s cooperation for the Chugoku Shimbun article “Hiroshima Forty Years On,” which reported on the work and activities of the journalists who participated in the Akiba Project and subsequently won the Japan Newspaper Publishers and Editors Association Award. The letter also mentions the strong response to “The Aftermath,” which was written by Mr. Hersey after he paid a return visit to Hiroshima in 1985. The Chugoku Shimbun reprinted this piece in the morning edition of its newspaper.

The letter was discovered last fall by Cannon Hersey, an artist and a member of an anti-nuclear group in the United States, at the Yale University library in Connecticut, where his grandfather had been a professor. On April 6, Mr. Hersey visited the Chugoku Shimbun head office in Naka Ward and handed the copy of the letter to the company’s chairman, saying that he would like to share his family’s history and help to create, together, a future full of hope. Jiro Yamamoto, the son of the former chairman, said nostalgically, “This is actually my father’s signature,” and, in return, gave Mr. Hersey some photos of his grandfather that were taken during John Hersey’s visit to the newspaper company in 1985.