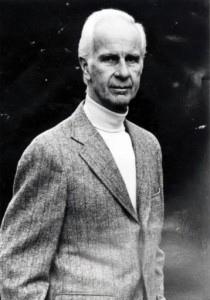 It has been learned that the first draft of Hiroshima, a report on the devastation wrought by the atomic bombing of Hiroshima, is held at the Yale University Library. Written by the American journalist John Hersey (1914-1993), the report created a sensation in the United States when it was published in 1946. Mr. Hersey donated the first draft of his work to the library of his alma mater in New Haven, Connecticut, in January 1947. The draft shows that the author made painstaking efforts to strengthen the text, indicating that he put deep thought into his words.

The report was written on 127 sheets of thin A4-size paper in neat handwriting. It is composed of four parts, including “A Noiseless Flash” and “The Fire.” Based on interviews with six A-bomb survivors, the report offers a faithful portrayal of their experiences, including the experience of of Kiyoshi Tanimoto, a priest at Hiroshima Nagarekawa Church.

Mr. Hersey’s draft shows how he polished each section by crossing out some words or adding new sentences. At the top of the first page are several different titles, including “Some experiences at Hiroshima.” These other titles were crossed out, leaving only Hiroshima.

To write his report, Mr. Hersey began gathering information in Hiroshima in late May of 1946. When it was published in The New Yorker on August 31, 1946, the magazine reportedly sold 300,000 copies in one day. The university library also holds a galley proof of the magazine that carried the report; a document issued by the U.S. armed forces on May 24, 1946, which permitted Mr. Hersey to enter the city of Kure; and a letter from Mr. Tanimoto to Mr. Hersey, in which Mr. Tanimoto recounted his A-bomb experience in English.

The first draft and other materials were found by Cannon Hersey, 38, the grandson of Mr. Hersey and a New York-based artist, and Taku Nishimae, 53, a filmmaker, as they were gathering information for a documentary film on John Hersey, according to Cannon Hersey.

The draft reflects his grandfather’s commitment to tell the true stories of the A-bomb survivors, the younger Hersey said. Mr. Nishimae saw a letter in which the U.S. Library of Congress asked John Hersey to donate the first draft of his report. This suggests, he said, that the draft is of significant historical importance.