Ahead of TPNW states parties meeting, Part 1: Setsuko Thurlow to continue work based on sense of responsibility as A-bomb survivor 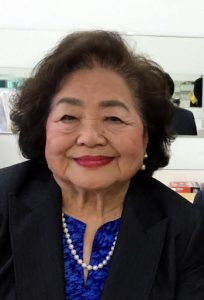 Ahead of the First Meeting of States Parties to the Treaty on the Prohibition of Nuclear Weapons (TPNW), scheduled to be held in the days ahead, Setsuko Thurlow, 90, spoke online about her thoughts and ideas. Ms. Thurlow is a resident of Canada who delivered an address at the Nobel Peace Prize Award Ceremony 2017 on behalf of the International Campaign to Abolish Nuclear Weapons (ICAN), an organization that contributed to establishment of the treaty.

With Russia’s invasion of Ukraine raising concerns about the use of nuclear weapons, the world appears to be increasingly dependent on the weapons. This year’s meeting will be held against severe headwinds. As the Ukrainian people lose hold of their daily lives, the world is filled with uncertainty. The truly bleak situation is marked by darkness. However, that is precisely why light seems to shine more brightly.

For me, that light is the TPNW. The First Meeting of States Parties to the TPNW represents a light illuminating the way forward, something that is necessary to escape from the darkness that are nuclear weapons. I am deeply moved by the opportunity to be involved as part of this process and truly feel my responsibility as an A-bomb survivor.

I have decided not to make the trip to Vienna in light of the pandemic situation, but I will attend the meeting online and speak at gatherings held by non-governmental organizations (NGOs), including ICAN, prior to the meeting. We have made a decision to push for the abolition of nuclear weapons and will not relax until we reach our goal.