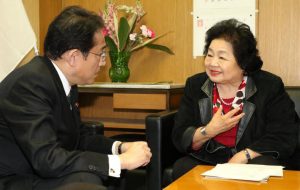 The Treaty on the Prohibition of Nuclear Weapons (TPNW) is the first international agreement to comprehensively ban the production and use, first and foremost, as well as the possession and threat of use of nuclear weapons. Ahead of the First Meeting of States Parties to the TPNW, Setsuko Thurlow, 90, an A-bomb survivor who resides in Canada, stressed, “I’ll continue to call for the abolition of nuclear weapons with the torch that is the nuclear weapons ban treaty in my hand.”


Without a longer wait, nuclear weapons must be abolished — Japan’s absence heartbreaking
The United States and other nuclear weapons states strongly oppose the TPNW, and Japan, which relies on America’s “nuclear umbrella,” is also not expected to join the treaty.

The nuclear powers have neither given up their nuclear weapons, considering it a prerogative granted by the Treaty on the Non-Proliferation of Nuclear Weapons (NPT), nor fulfilled their obligation for nuclear disarmament imposed by the NPT. Their irresponsibility has engendered growing frustration among non-nuclear weapons nations and civil society that call for the elimination of nuclear weapons, a situation that gave rise to the TPNW. We simply cannot wait any longer. It is said there is a gulf between the nuclear haves and have-nots, but that is not because of the TPNW.

I understand that the United States is applying extreme pressure on allies to prevent their participation in the states parties meeting. Japan’s national government seems to be unconcerned about this turn of events, uncritically subscribing to U.S. talking points.

Some criticism has been leveled at the TPNW for its lack of specific content. However, the treaty’s simplicity was intentional. In-depth discussions will start at the upcoming meeting. In addition to the model Nuclear Weapons Convention previously drafted by numerous non-governmental organizations, the knowledge and experience accumulated by civil society will become the heart and soul of the treaty.

Germany and Norway, members of the North Atlantic Treaty Organization (NATO), a military alliance with American nuclear forces at its core, as well as Finland and Sweden, which have made a bid for their own NATO membership, will be joining the states parties meeting as observers.

Japan’s national government extols its role of serving as a bridge between nuclear and non-nuclear weapons countries, but it will not participate in the states parties meeting as an observer or exhibit any willingness to listen to the opinions of the parties promoting the treaty. How could Japan serve as an intermediary acting in such a way?

Until the moment the meeting starts in Vienna on June 21, I will not give up on the idea of waiting for the government to change its stance. As an A-bomb survivor, it would break my heart if the government does not participate in the meeting.

In March this year, Ms. Thurlow sent a letter to Japan’s Prime Minister Fumio Kishida, elected from the A-bombed city of Hiroshima, calling for the country to participate in the states parties meeting, with the aim of having Japan clearly enunciate its stance on the issue. She also severely criticized the fact that a subset of Japan’s politicians has demanded that the so-called policy of “nuclear sharing” be debated.

It is a serious and shameful matter that politicians of the A-bombed nation of Japan have openly called for debate on the policy of “nuclear sharing,” in what seems to be an attempt to take advantage of a time in which the world was shaken by Russia’s invasion of Ukraine and filled with apprehensiveness and lethargy. I was relieved to learn that Mr. Kishida denied out of hand any such debate from the perspective of his desire to strictly adhere to Japan’s three non-nuclear principles.

However, I think his attitude toward the TPNW is too passive. I sincerely hope that Mr. Kishida can point out the inhumane nature of nuclear weapons on behalf of A-bomb victims who died horrific deaths and survivors who continue to clearly enunciate their convictions, and that he can lead discussions to explore security that is independent of the concept of nuclear deterrence.

With the torch that is the TPNW in our hands, we need to continue to make every effort until the day the world is free from nuclear weapons as citizens determined to achieve the elimination of such weapons.

Herein, we ask A-bomb survivors and young people participating in the First Meeting of States Parties to the TPNW or related events about the significance of, and their expectations for, the meeting.

The TPNW was successfully established based on an international movement that got its start between 2010 and 2012. The treaty would not have been possible without the foundation created by many years of extraordinary efforts made jointly by citizens of the world and the countries that supported the idea, to say nothing of A-bomb survivors.

In 1997, supporters of the movement drafted a model Nuclear Weapons Convention (NWC), which expressly forbade the weapons, and received approval from a subset of countries. An updated model NWC was submitted to the NPT Preparatory Committee by Costa Rica and Malaysia in 2007 and referred to by the UN secretary-general in his Five-Point-Plan for Nuclear Disarmament in 2008.

The NWC detailed a specific course for the total elimination of nuclear weapons in a verifiable manner, which required the highly unlikely participation of countries with thorough knowledge of the weapon. As diverse opinions existed even among anti-nuclear organizations, the movement urging non-nuclear weapons states to first create and conclude a simple treaty to outlaw nuclear weapons grew in scope.

The TPNW, adopted by the United Nations in 2017, is also sometimes called the Ban Treaty (BT). We are now standing at the starting point for broadly fostering this treaty.

Profile
Setsuko Thurlow
Born in Hiroshima City in 1932. Graduated from Hiroshima Jogakuin University and earned a master’s degree in social welfare at Toronto University in Canada. She delivered a speech at the Nobel Peace Prize ceremony in 2017, on behalf of the organization International Campaign to Abolish Nuclear Weapons (ICAN).

Ahead of TPNW states parties meeting, Part 1: Setsuko Thurlow to continue work based on sense of responsibility as A-bomb survivor