Zaimoku-cho, Part I: A neighborhood of tradition, lost to the bomb 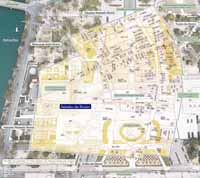 by Masami Nishimoto, Masanori Nojima and Junpei Fujimura, Staff Writers
(Originally published on April 28, 2000 in the series "Record of Hiroshima: Photographs of the Dead Speak")

Roughly 60 memorials and monuments, large and small, have been erected in all corners of Hiroshima Peace Memorial Park. One stone monument, about 70 centimeters tall, stands east of the Cenotaph for the A-bomb Victims. Former residents of the Zaimoku-cho District, who lost family members and houses in the atomic bombing, then were forced to leave the area due to construction of the park, built the monument in 1957. The inscription reads simply “Former Zaimoku-cho District.”

The name “Zaimoku-cho” means “Timber Town” and is derived from the fact--recorded in the “Chishinshu,” a document compiled by Hiroshima Province in the Edo Period (1603-1868)--that “A large number of timber dealers have lived in the area since early times.” When Hiroshima Castle was built at the end of the 16th century, the district of Zaimoku-cho was developed on the delta between the Honkawa and Motoyasu Rivers. From the time Hiroshima became a castle town, six temples were constructed where deities for healing illness and ensuring safe births were enshrined.

In more modern times, Nakajima Honmachi, a district to the north of Zaimoku-cho, came to be one of the liveliest parts of Hiroshima. Zaimoku-cho, too, with its narrow streets stretching through the lower half of present-day Peace Memorial Park, was a bustling part of the city. The writer Taro Susukida, who described the culture and customs of Hiroshima before the atomic bombing, depicted the Zaimoku-cho District as a place of common folk where tradition was appreciated: “On the streets of Zaimoku-cho, I could still feel the atmosphere of good days gone by.”

As a child, Yasuko Onishi, 68, used to play on the grounds of Seiganji Temple, where Peace Memorial Museum now stands. She and her friends enjoyed performances by storytellers and monkey trainers and often stayed until the temple closed its gate at sunset. She also recalls buying “okonomiyaki,” a kind of crepe with cabbage and meat, and sweet rice cakes from vendors on the street. “It wasn't until my grandchild was born that I managed to speak about my experience of the atomic bombing,” she said. “Before that, I just couldn't bring myself to talk about it.” On the morning of the bombing, Ms. Onishi was with her parents and sisters in Zaimoku-cho; she survived, but they all died.

How many people perished when the district was decimated by the atomic bomb? Research left by Toshiaki Sakata, who was involved in the construction of the stone monument for Zaimoku-cho and died in 1989, uncovered clues to the deaths of 341 people.

The Chugoku Shimbun's investigation confirmed a death toll of 393 people: 388 had died by the end of 1945, two died in 1946, and one died in 1947, 1948, and 1951, respectively. While the generational changes in some families meant that a certain number of the deceased could not be easily traced, at the same time new individuals with helpful information were located. Among the dead, a total of 223 photographs were gathered.

In the related article A-bomb Testimony by Haruso Ogawa, a former resident of Zaimoku-cho provides a first-hand description of the devastation wreaked on his district and the loss of his wife. His account movingly documents the enormous suffering of a neighborhood where only one stone monument now remains.
ツイート
Return